Arriving in Savannah in the late afternoon, we decided to take an evening stroll around the city before grabbing some dinner.

I had been to Savannah once previously in 2005 but it was father’s first visit. I consider Savannah to be one of the prettiest cities in the world. The architecture combined with the Spanish moss and that good ‘ole southern charm result in a truly gorgeous city. 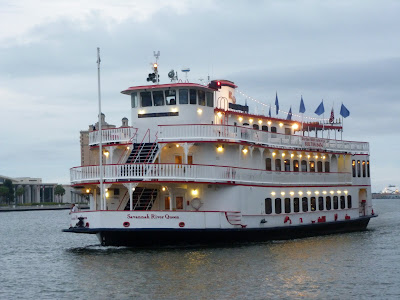 The Savannah River Queen at dusk

For dinner we headed to Rocks on the River located on the Riverwalk. Having learned a lesson from lunch, we decided to only order an appetizer each and to share a main course. 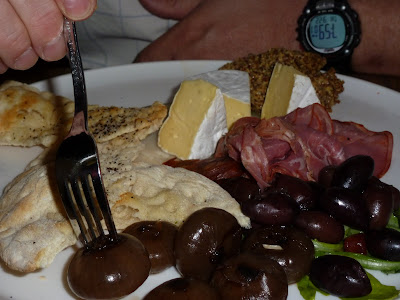 I ordered the chicken and waffles: marinated chicken served with arugula, sun-dried tomatoes, boursin cheese, mustard dressing between two waffles. To be honest, I basically ordered it because of the fillings and the waffles mostly went uneaten. 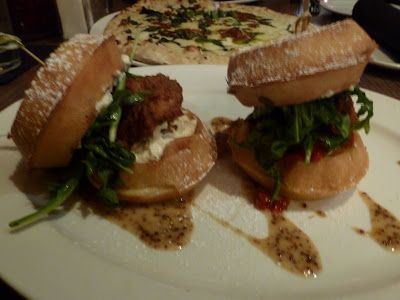 When ordering, I started to doubt whether we needed a main course as I thought perhaps we had enough food. Our server, however, insisted that a main would definitely be OK to share so we ordered the white pizza: mozzarella, asiago, ricotta, sun dried tomato pesto, garlic. 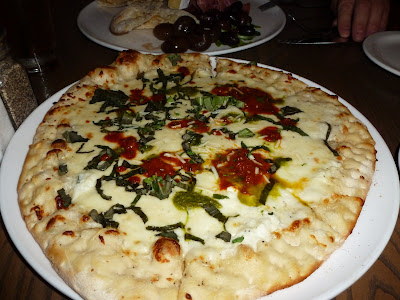 We had asked for all the food to be served at once and I had a fit of the giggles when it arrived as, as usual, by my standards, it was enough food for four. Accordingly, the pizza went largely uneaten.

The next morning, we decided to do the “tourist thing” and took a trolley tour of historic Savannah. I had been on the road for over five months and during that time had promised myself (and succeeded) that I would never get on one of those awful big red double-decker tourist buses, anywhere. I prefer to walk to see a city and people always look so bored and spaced out on those buses. However, given we only had a few hours to spend in Savannah, a guided tour is the best way to see the main sights and learn the most. I continue to maintain, however, that my record is still intact as a trolley can in no way be considered a red bus. Our driver/guide was very knowledgeable it was a lovely way to see this picturesque town in the limited time that we had. 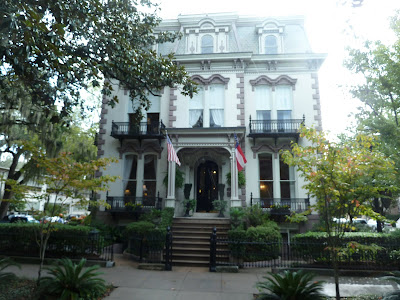 One of the thousands of pretty buildings in Savannah

After the tour, and an uneventful lunch (a Cuban sandwich split between us, we departed Savannah and headed towards Atlanta.