Five Guys is a chain of restaurants serving that all-American of foods: burgers and fries. Based on the signs on the wall, it has won every award and recommendation available so when I walked past, I decided to drop in for a light snack.

The main reason I was attracted to Five Guys was that you are able to list which toppings you want on your burger and it is custom made to order (no pre-made burgers sitting in warmers here). I ordered the smallest burger they had and although I initially declined to order fries, they looked great so I succumbed and ordered the smallest size they had.

The burger itself looked less than appealing but was in fact very tasty. I prefer my burger buns a little crustier but it really tasted like a good homemade burger. You could see that the patty was hand formed and not the smooth-rubbery discs you get a other chains. 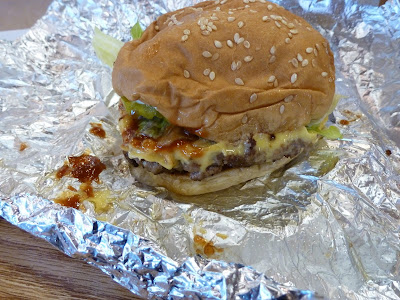 I know it doesn't look at all appealing, but it was delicious.
Some crustier bread and it would have been just like homemade.

My meal at Five Guys reminded me of the golden rule of eating in the US which I had forgotten: "the portion sizes are huge". When I received my fries, I took them back to the counter to advise that I had only ordered one small serve, not the family size but alas, this was the small size. 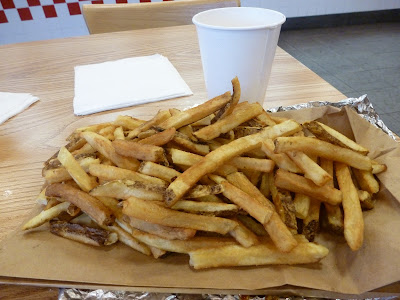 The "small" serve of fries

Did the meal satisfy? Yes. Do I need to return? No.