I managed to squeeze in a flying visit to Edinburgh, Scotland before departing for the United States. My trip coincided with a visit to the Edinburgh Military Tattoo, a show my father watches each year and I have always found boring (or at least complained it was boring so I could change the television channel). However, when the chance arose to see the Tattoo live, I jumped at the chance.

I arrived in Scotland the night before the show and discovered that the Edinburgh Fringe Festival was also running whilst I was in town. The town was full of tourists and performers with a multitude of free shows and street performers on every corner to keep one entertained. Taking advantage, again, of the New Europe free walking tours, I spent the morning learning about the main historical sites and landmarks. 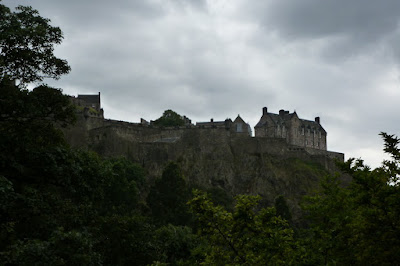 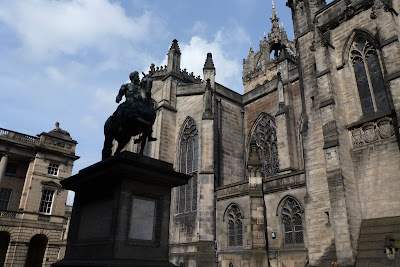 There were two food stereotypes that I had to eat in my limited time in Scotland: haggis and a deep-fried chocolate bar.

The traditional way to eat haggis is with mashed potatoes and turnips, but I opted for something a little less confronting.

Oink is a small shop on Victoria Rd that sells Scottish pulled pork sandwiches served with your choice of white or grain roll, chili or relish and stuffing or haggis. I asked the salesgirl for whatever combination she recommended and had a wheat roll with chili and haggis. It was surprisingly delicious. Like any other sausage or mystery meat, I found the haggis very tasty and I think most peoples’ resistance to haggis is the mental issue once you know how it’s made. 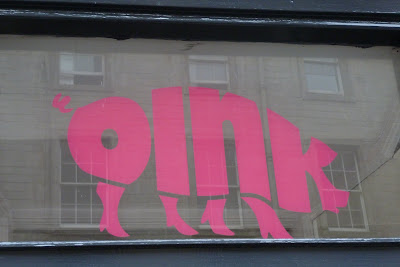 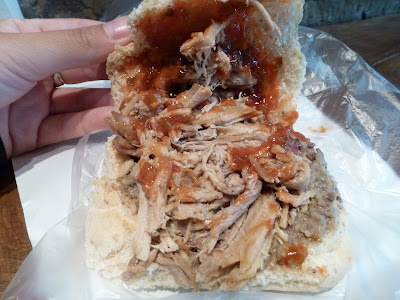 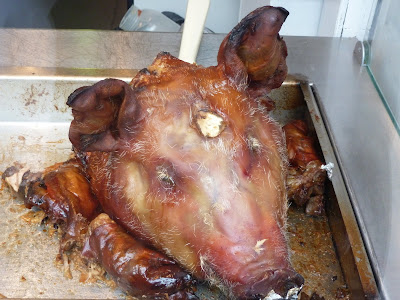 At the beginning of the day, the full pig is displayed in the window and served throughout the day until sold out. Whilst most tourists recoil at the sight (where do they think meat comes from?), the sight of the tender meat and crackling was enough to get me through the shop door.

The second cliché was a deep-fried chocolate bar; Mars is the most popular but I chose to have a Bounty. Dipped in a very light batter, the bar was fried until the batter was crisp. I was expecting an oily mess that I would hate but steeled myself to try it for journalistic purposes. I hate to admit it, but it was lovely. It really just tasted like a warm Bounty, the batter was so light it was unnoticeable and it wasn’t overly oily at all. However, I think leaving your chocolate bar in the sun for 5 minutes before eating will produce the same effect with significantly less effort and calories. 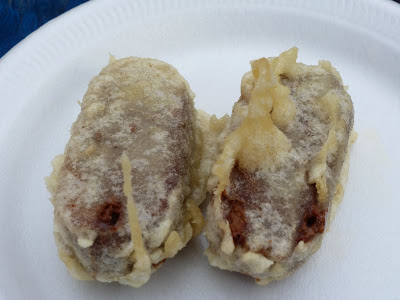 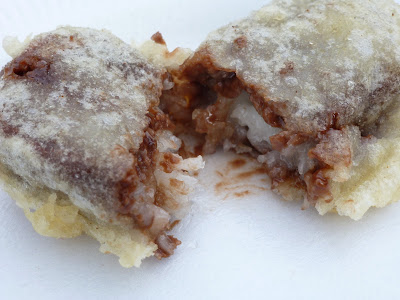 Finally it was time to head to the Tattoo. It was a perfect summer’s evening for Edinburgh with a temperature of 12ºC (my relative’s back home in an Australian winter were warmer). I put on every layer of clothes I owned and although my torso was warm, the rest of me was numb with cold for the entire evening. The show itself was fantastic; there is something very moving about Scotland the Brave played on bagpipes and I am so pleased I was able to make it to this spectacle. 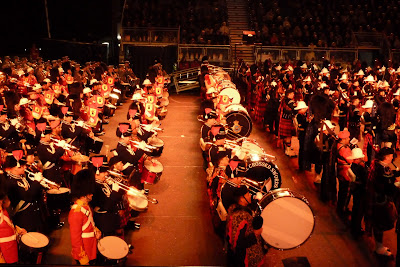 Email ThisBlogThis!Share to TwitterShare to FacebookShare to Pinterest
Labels: scotland