Perfection. Simple, unquestionable perfection. Victor Arguinzoniz, head chef and proprietor of Asador Etxebarri is a maestro of the grill and the architect of what was undoubtedly the greatest meal of my life. 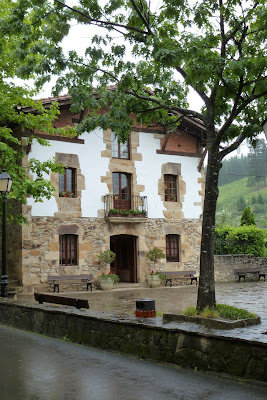 The exterior of the restaurant

I have spent the evening reflecting on visits to other such highly regarded restaurants, in Australia and overseas, but can think of nothing else that comes close to today’s experience and in fact, those previous “great meals” have now paled in comparison.

The ethos of Etxebarri is very simple: take the best local produce available in season, cook it over la brasa (a charcoal grill) and let the natural flavours of the ingredients shine through. Each dish is uncomplicated and clean in taste (although certainly not simple to execute).

Without a car, it is a 2 ½ hour trip from San Sebastian to the village of Axpe in the Basque countryside where Etxebarri is located but it is well worth the effort. The train passes through the countryside, past many local farms, through mountains and over small streams and even running around the coast for part of the journey. 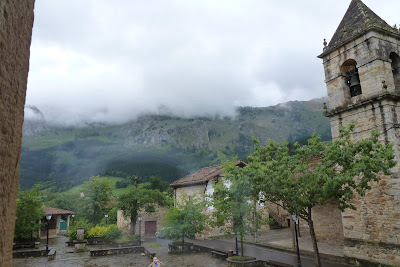 The village of Axpe

(For those interested, refer to the end of this post for further details about getting to Etxebarri by train).

I arrived at Etxebarri about 90mins prior to my reservation time. Cold and wet I searched for somewhere warm to sit whilst reading a book to kill the time. Fortunately, I remembered that Etxebarri is located on the 1st floor, above a tavern that caters more for the locals. I found refuge from the rain and warmed up whilst trying to dry out my shoes. 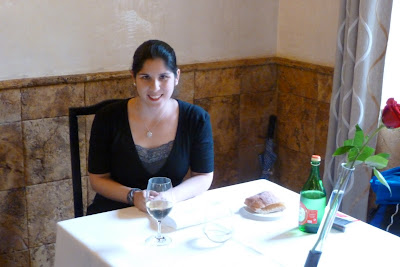 The restaurant is not overly large and the tables are spaced quite far apart giving a feeling that each table is special and somewhat intimate. Soft classical music plays in the background and the views of the surrounding countryside help set the scene. 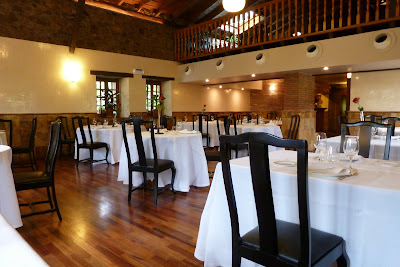 The menu is presented bound in wood and a separate wine list is provided (both in Spanish, Basque and English). The wines are priced by the bottle but can be ordered by the glass as well. 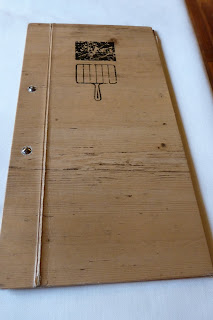 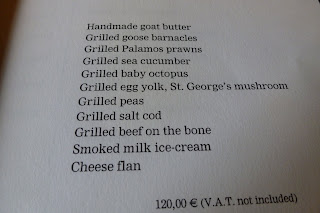 The degustation menu. There is also an extensive a-la-carte menu

I decided to order the degustation menu but to also request an order of the homemade chorizo that I had heard so much about in my research. The waitress suggested that it be served as an aperitif and I obliged.

The chorizo was fork tender and packed with flavor and acted well as an amuse bouche as my palate was certainly awakened. 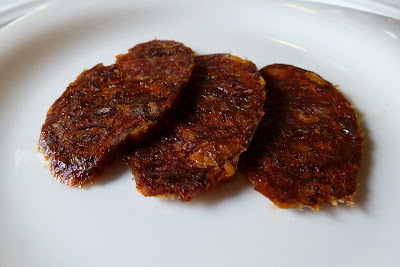 The first course of the degustation menu was Smoked Goats Butter served on grilled bread with sliced mushrooms and a sprinkling of ash salt. The butter was deliciously smoky and smooth and was quite light compared to cow’s milk butter. Whilst certainly not a quantity of butter that one should consume daily, it was a great indicator of the many wonders to come. 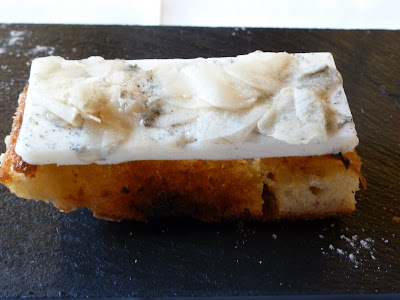 The second course was grilled goose barnacles, which are prehistoric-looking crustaceans. Unsure of how they were to be eaten, the waitress offered to demonstrate noting to be careful as they can squirt. As soon as she completed the sentence, she managed to squirt me in the eye with barnacle juice which was quite amusing and gave myself, Leila and Seth a good laugh. The only way I can describe the barnacles is that they “tasted of the sea”: salty and fresh, not briny. 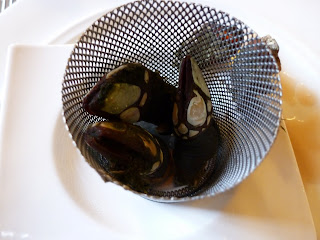 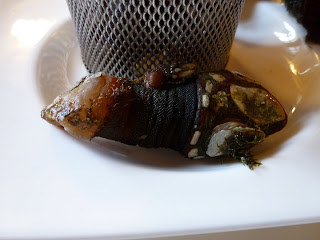 The third course was Palamos prawns, grilled over la brasa and sprinkled with coarse salt. The smoke brought out the prawns natural sweetness and they were without doubt the best prawns I have ever eaten (and likely will ever eat). I have never been one to eat the prawn brains but I found myself sucking on the head and searching for every little uneaten morsel to mop up with my bread. Truly sublime. 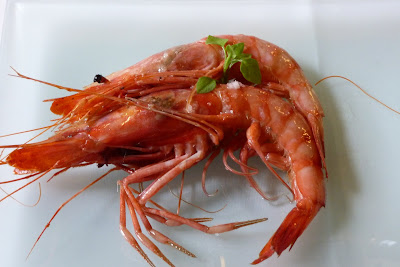 The fourth course was grilled sea cucumber served with olive oil and fava beans. I had eaten sea cucumber a few times as a child in Hong Kong and remember it being slimy and unappetising. Perhaps the species is different here in Spain because this was delicious. It was similar in texture to a razor clam, quite sweet and offset nicely by the olive oil which was not overpowering. 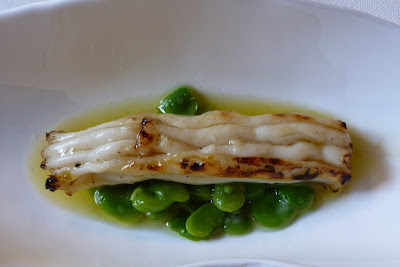 The fifth course was baby octopus served with onion confit. Halfway through this dish I started to feel sad that it would soon be over; I didn’t want it to end. The octopus was sweet and tender and the onion confit was the perfect accompaniment. 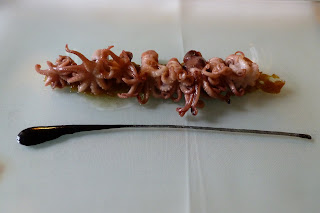 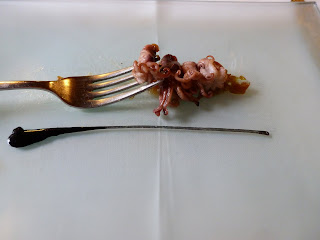 The sixth course was grilled egg yolk, with potato puree and St George’s mushrooms. The sous chef, Wesley (more on him later) explained that they grill the entire egg in the shell enough to warm it but not enough to harden the white. Once pricked, the yolk formed a creamy and rich sauce that was balanced by the mushrooms and begging to be mopped up with bread. 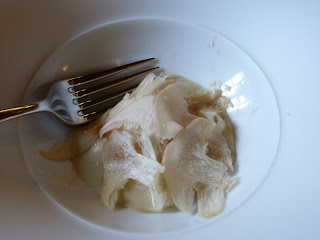 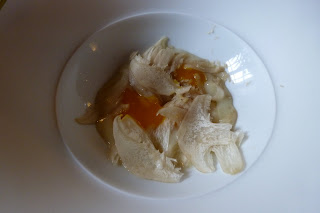 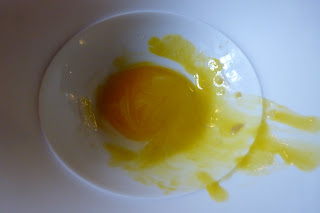 The seventh course was peas served with the juice of the grilled pods, jamon juice and pork fat. Prior to this meal, I have never met a pea that I enjoyed and would avoid ordering any dish on a menu that listed peas as the little suckers are so hard to pick out. This meal has changed that. The peas were young, small and crisp, packed with flavor and tasted like spring. 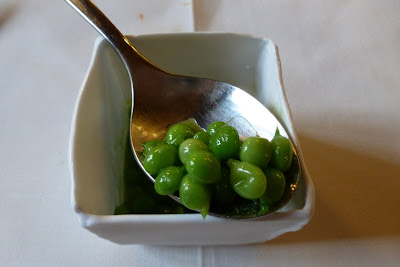 As the eighth course arrived the fog outside descended lower onto the mountains providing the perfect setting for the two “main courses”. 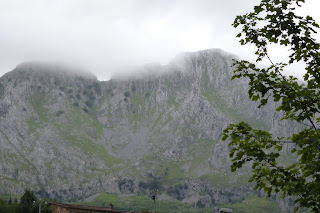 The eight course was salt cod served with grilled red capsicum, an unidentified purple flower and a hollandaise-style emulsion. Whilst I appreciate the perfected technique in this dish, the salt cod was my least favourite of the day. I found the texture to be a little chewy as I prefer fresh fish but the capsicum was lovely and smoky and the flower had a strong yet pleasant pepper taste. 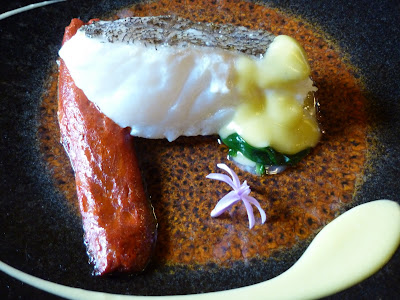 The ninth course was grilled Galician beef on the bone. All the other tables were given one piece to share with individual side salads dressed with a sharp vinaigrette. I, however, was given the whole piece to eat by myself. 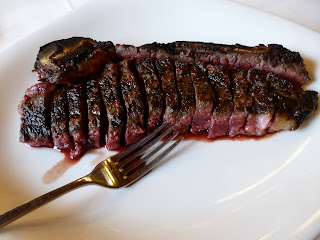 If the beef was the only thing I had ordered today, it was still too large a portion for me; however, it was without doubt the best steak I have eaten and the benchmark steak that all others will now be judged against. It was simply grilled and served with sea salt. No other seasonings were required. Unlike other steaks served in the US and Australia where the cow is young (under 2 years) and the meat is aged in the fridge, the Galician beef is aged by letting to cow live longer. Cooked well, the meat is still tender but has a stronger “beef flavor”. 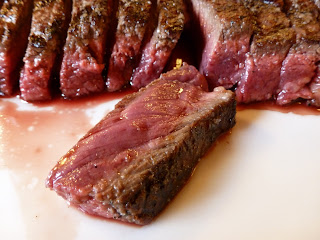 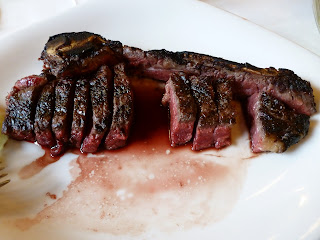 After talking across the restaurant for most of the meal, Leila, Seth and I decided to join tables and eat the desserts together. It is common for the desserts on a degustation menu to be a weak point of a meal, but this was not the case.

The tenth course was Smoked milk ice-cream served with a berry sauce consisting of raspberries, strawberries and blueberries. The smoky taste was so pleasant and unlike anything I have experienced before, with the berries providing a perfectly sharp contrast. The dessert was light and also cleansed the palate. 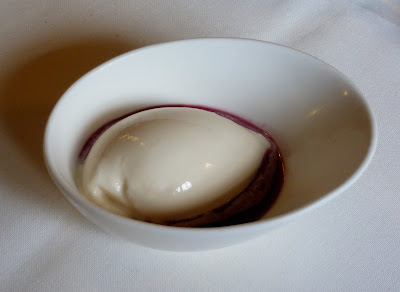 The final course was a cream cheese flan which was similar to a cheesecake but much lighter in texture and taste. It was creamy and smooth and served at room temperature so it melted on the palate. The waitress unmolded the dessert at the table and it was an exquisite end to a faultless meal. 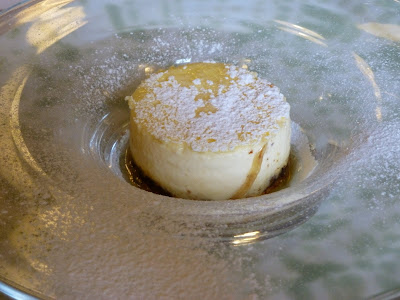 Leila, Seth and I then sat and talked for a while, enjoying a few more drinks (and a mini almond muffin as an accompaniment) before having a tour of the kitchen.

We were taken downstairs to meet Wesley, a sous chef from the United States who started working at Etxebarri sixth months ago (likely replacing the previous sous chef, Lennox from Australia). 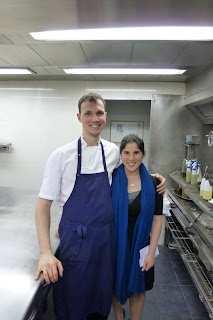 Wesley gave us a tour of the kitchen, the wood piles, walked us through the charcoal making process and answered our many questions. The primary woods used as oak and grape (soaked in red wine) and the charcoal is commenced each morning at 8am to be ready for 1pm service. 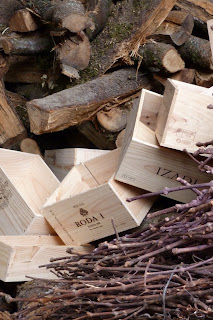 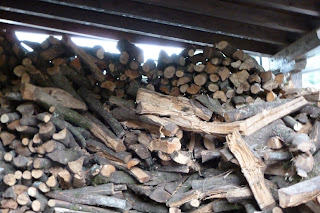 The brasa was designed by Victor and contains a system of pulleys to raise and lower the grill to the precise height over the heat for each ingredient. Wesley explained some of the cooking processes for each ingredient and the care that goes into each dish. As Leila expressed, “the meal felt as though each dish was made by someone who loves and cares for you and you can taste that love”. 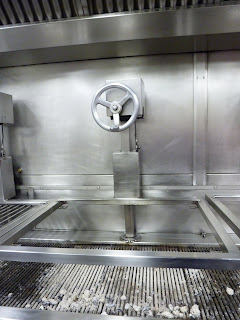 Leila, Seth and I were the first to arrive for lunch and the last to leave (after our tour); the experience lasting just over 5 hours.

Victor Arguinzoniz’s restaurant is unique and what he has created is very very special. There is nothing like it and no adjectives can adequately define the experience to do it justice.

If you are anyway near Basque country, it is worth the effort. My trip was long and arduous without a car, but I would do it again in a heartbeat and the long train trip added to the excitement on the way there as the countryside is very beautiful, and gave time for long reflection on the way home on what was truly a perfect experience.

How to get to Etxebarri by Train

Assisted by Google and a friendly reviewer on TripAdvisor who answered my queries, I decided to make the effort and travel to Etxebarri by train and taxi, avoiding the need to limit alcohol consumption and also to avoid the hassle and expense of hiring an automatic car for one day.

From the Amara train station at San Sebastian, you take the Euskotren towards Bilbao to Durango. The cost is €4.20 one-way (cheaper if you buy a return ticket but my combination of Spanish and charades was not understood by the Basque-speaking ticket salesperson).

The train leaves Amara at 42minutes past the hour and takes 2 hours to reach Durango.

From Durango, follow the crowd across the tracks and exit the station to your right. About 50m away, infront of a playground is the taxi rank. The taxi from Durango to Axpe cost €13 and took about 10-15minutes.

The way back is easier as the waiters will happily call you a taxi back to Durango, or if you are lucky like me, you will make some new friends who offer to drive you back. The train from Durango leaves at 42mins past the hour.