Gluttony. I can't think of any other work to adequately describe the reasonable and civilised pintxos crawl that started early in the afternoon and ended as an all-out binge finishing late into the evening.

I had arrived in San Sebasitan early in the morning after taking the overnight train from Paris. San Sebastian is known as the culinary capital of Spain, and considered by many to be the premiere food-city in the world. San Sebastian is in Basque country with is known for its new Spanish cuisine and innovative chefs. It has the highest concentrate of Michelin stars in the world (in relation to population) and as result, the standard of food in the entire town rises to meet the high bar set by these elite chefs.

When not dining at Michelin star restaurants, another culinary drawcard are the pintxos which are the traditional bar food in the Basque country. Similar to tapas in the sense that they are served in bars with drinks, but different as they are served individually and are commonly much larger than tapas.

I started touring the old quarter of San Sebastian with Dania, another Aussie girl staying in the same room with me at the Pension.

We commenced our journey at Hori Da and ordered a selection to Pintxos to share together with a few glasses of Txakoli (the traditional drink with pintxos, a sparkling dry white wine, poured from a height to create a fizz like cider). 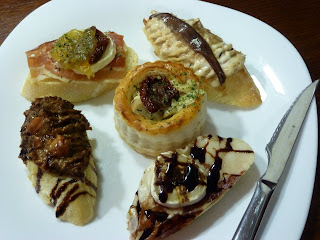 Pictured on the plate above is (clockwise from top): 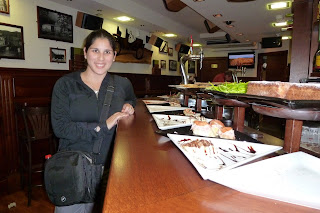 The interior of the bar
We then headed to Bar Martinez for round two, consisting of cheese croquettes, smoked salmon canapes and the below item that we believe was fish egg sack based on the taste, texture and our inability to grasp Spanish and/or Basque. 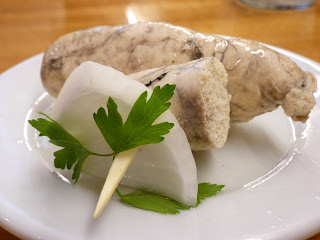 Although the taste was fine (like cooked tuna), the texture was grainy and off-putting and the physically appearance did not help

We didn't get the name of our next stop but it had jamon hanging from the rafters and we stopped for a couple of glasses of sangria (the best I have ever tasted). 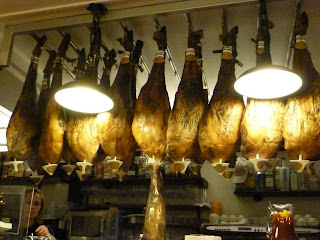 The interior of the [name unknown] 3rd stop on our tour
The next stop was at Bar Txalupa Jatetxea for a variety of pintxos including goats cheese with tomato confit, jalapenos, more smoked salmon and angulas (baby eels with seafood salad) (pictured below) 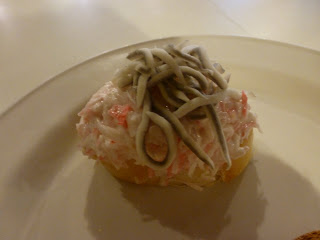 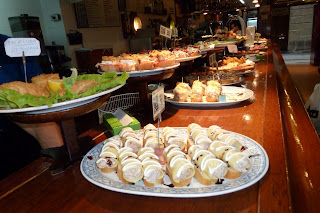 The interior of the bar

We then returned to our pension to freshen up before heading out again. Back at the pension we met another roommate, Darias, and the three of us heading out for more eating. The first place we stopped at, I managed to show some self control and didn't eat anymore stating that "I'm full. I'm not going to eat for the sake of eating. Maybe if I see something spectacular, I'll try it but otherwise I'll pass".
It was, however, when we arrived at our final destination for the evening, Astelena, that the level of quality of the pintxos improved (from an already high standard) exponentially and the gluttony began.

As with most bars, the food is laid out on the bar and patrons choose what they wish. Some bars may also have a small menu that you can also order from. However, at Astelena, the additional hot foods listed on the menu were far more extensive than the already wide selection on the bar.

We selected three or four dishes to share but that list quickly blew out as we saw what other patrons were eating and felt the need to try everything and of course, combined our order with a bottle of txakoli. 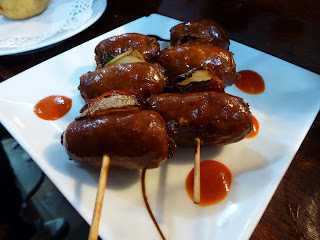 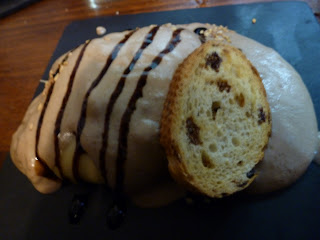 The foie gras ravioli was the surefire winner for me. It was creamy, smooth, melt in the mouth and more calories than I dare to consider. 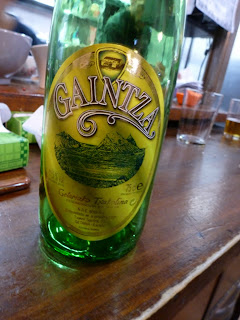 The bottle of Txakoli 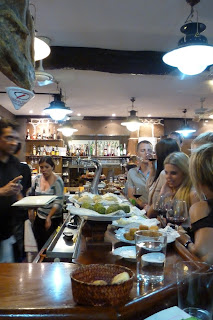 The interior of Astelena
After Astelena, I headed back to the Pension vowing to skip breakfast knowing the 12 course feast that was awaiting me the next day at Asador Etxebarri.
Posted by Emily at 10:38 pm