After finishing touring the Tower of London at 3.15pm, I decided to walk to Harrods and promised myself that I would not eat until I reached Harrods or 4pm (whichever came first). At 4.00pm I was still miles away from Harrods so decided that the Tube was in order.

My first priority was to locate the often-discussed Harrod's Food Hall. Similar to a David Jones food hall, Harrods has more fresh ingredients, much greater variety but fewer places to eat. 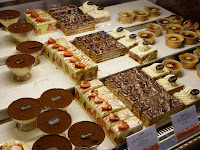 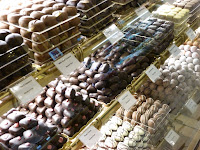 A selection of the sweet treats
After touring the chocolates and the pastries I was still unsure what to purchase until I saw it......the dim sum restaurant! Sometimes in life, you know you are being ripped off yet you feel that it is acceptable. Eating in Harrods having my favourite food was one such time. I knew it was overpriced, however it was an experience and I also knew it had to be good - and it was.

Each steamer was priced at $10-$13 each but I couldn't resist and ordered two. 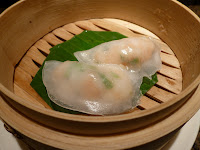 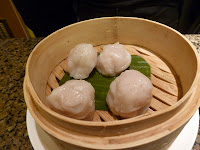 Crab & Pork Siu Loong Bau - the shape was certainly unconventional
but the taste was flawless
Chinese food is often viewed as being hard to find in London (good Chinese anyway); although I have had very limited experience in this matter, if you are willing to pay for it, Harrods certainly meets expectations!
Posted by Emily at 6:00 pm