I can't breathe. I'm choking on my champagne and the burning in my lungs won't stop. I had a split second decision to make: spray my champagne all over the table or breathe in and now it's in my lungs.

What caused this predicament? The waitress at the Golden Fleece, the signature restaurant aboard the Carnival Legend, repeating our dinner order back to us:

"OK, so you would like two escargots, one beef carpaccio, two ahi tuna tartares, one New England crabcake, two lobster bisques, one portobello mushroom, one caesar salad, two surf and turfs, one chicken, one lobster ravioli, one side of wasabi mashed potatoes and two sides of truffle macaroni and cheese".
The sheer greed of the moment dawned on me when the list of food for four adults seemed sufficient to feed a football team and with a mouthful of champagne, I wasn't able to laugh without inhaling it first. I can't believe this is how I'm going to meet my end, drowning in champagne. My face is going red and I'm punching myself in the back begging, pleading one of my dinner companions to help me out.

It was our fourth night at sea and we had already decided that the main dining room aboard the ship was not worth visiting anymore. Actually, we made that decision after the first night and had been preferring to eat at the food court on the Lido deck ever since.

There was another option: The Golden Fleece. A signature restaurant that costs an additional $30 per person. Fellow cruisers who had eaten there previously were all raving about the food, so Laina, Jared, Michael and I decided to lash out. In summary, the food was so good that we rebooked to eat there again two days later.

Thrilled by the revelation that we were able to order as many appetizers as we desired, we decided to try them all. The meal was perfect. It was hard to believe that we were on the same boat as the quality of the food was far superior to the main dining room. The escargot were delicious, the tuna tasty and firm (far exceeding my expectations based on Bourdain's "don't eat the sushi on a cruise ship" advice), the bisque rich and creamy and the steak was fork tender.

At the end of the meal, we were beyond full but that didn't stop us from ordering all the desserts on the menu that we could. We ended up having to take the cheese platter and gigantic slice of cheesecake back to the room to eat another day but between the four of us, we covered off most of the restaurant's menu.

For the cost of a few drinks per person, a meal at the Golden Fleece was well worth the expense and a wonderful evening with new friends. 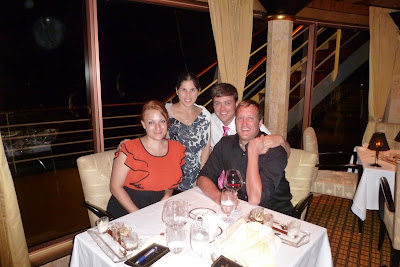