My final meal in New York City was at Per Se, Thomas Keller’s east coast signature restaurant. It has been awarded three Michelin stars, four stars by the New York Times and listed at spot number 10 on this year’s Best Restaurant List.

A table reservation is quite hard to come by but after persistent effort, I managed to secure one. An alterative option is to eat in the salon part of the restaurant on a walk-in basis. During my visit, only one table was occupied so I would imagine that this is easy to come by. The menu in the salon, however, is a-la-carte and the tasting menus are not available if seated there.

Before I arrived, I promised myself that I was going to order the smaller 5 course tasting menu for lunch as my appetite for multi-course extravaganzas is waning, however the one signature dish that I wanted to try (Oysters and Pearls) was only available on the nine-course menu so I braced myself for the onslaught.

The restaurant’s décor is sleek and modern with grand views over Columbus Circle. Located in the Time Warner building, opposite Masa, its interior does not match the assumption one would make when you learn it’s located in a shopping mall. 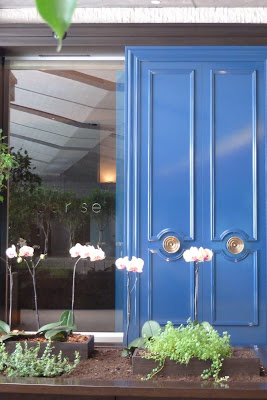 The meal started with a complimentary champagne aperitif accompanied with warm Gruyère Gougères and another signature Keller dish, the Tartare of Scottish salmon, red onion crème fraîche, and black sesame tuille. The gougères were light and the cheese was subtle but the star was by far the salmon. The combination of flavours was faultless and it was one of the most delicious small bites I’ve had in recent times. 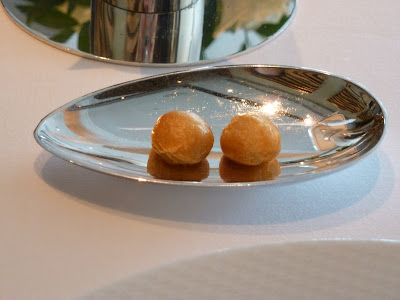 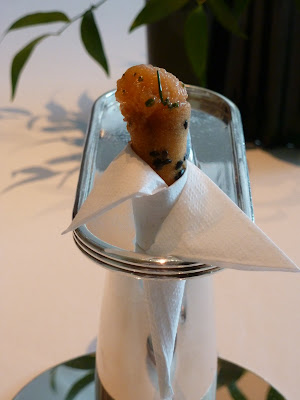 The next amuse bouche was a “cranberry bean velouté: peekytoe crab beignets, cumin crème fraîche and jamón ibérico”. The velouté was added tableside so the presentation was a lot prettier than the photo implies. 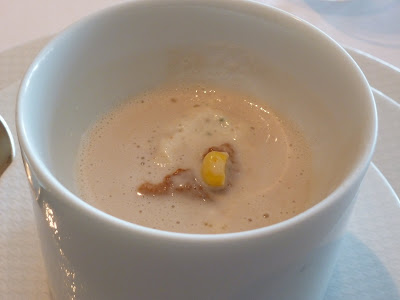 First course was “Oysters and Pearls: Sabayon of Pearl Tapioca with Island Creek Oysters and Sterling White Sturgeon Caviar” a dish that was first served at the French Laundry and is now featured on Per Se’s menu. Having read so much about this dish in various food literature for years, I was excited to try it but also a little nervous as I’ve never really loved oysters. In short, it was wonderful; creamy, with explosions of tapioca and caviar in each mouthful. 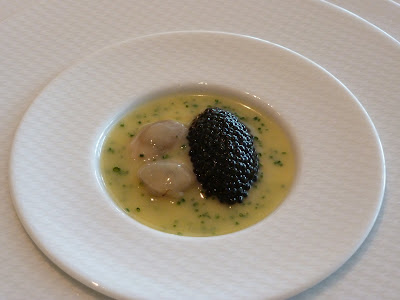 The next course was another amuse bouche not listed on the menu: truffle custard served with a chive chip. At this point, I knew that this meal was going to be something truly magical. Again, faultless technique and flavours. 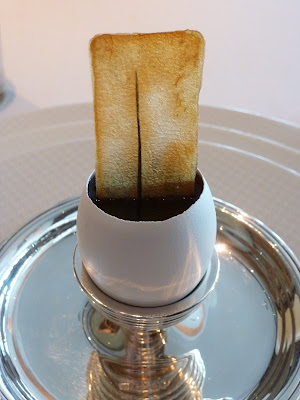 Next up was the bread service with fluffy parker house rolls and two types of butter, goats and cows. Delicious, but with eight courses to come plus mignardises, I had to restrain myself. 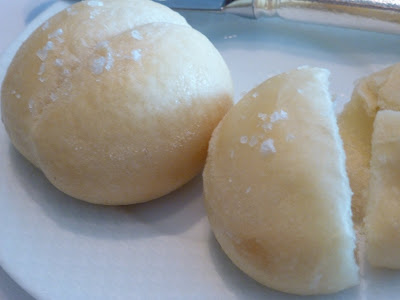 The second course “Hawaiian Hearts of Peach Palm: Navel orange, cherry belle radishes, mâche and black winter truffle puree”. The presentation of this course was dainty and striking however I didn’t think the truffle puree matched the other flavours and I felt it was out of place. 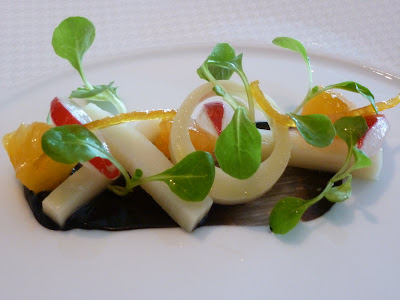 The third course was “Atlantic Striped Bass Confit A L’Huile d’olive: ruby beets , garden dill puree and horseradish crème fraîche”. Dill is one of my favourite flavours and the puree delighted the palate with the perfectly cooked fish. 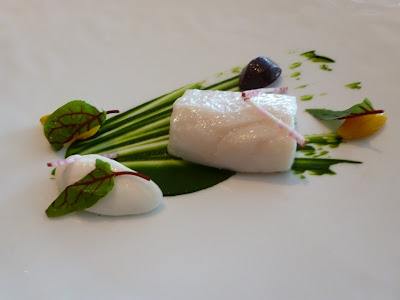 The fourth course was “Butter poached nova scotia lobster: wilted arrowleaf spinach, glazed turnips, tomato confit and chicken jus”. The lobster was succulent but I think the jus was the star of the dish. Truly wonderful. 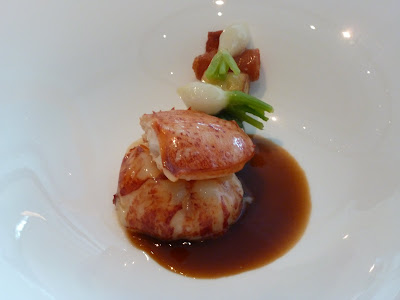 The fifth course was “Thomas Farm’s Pigeon “Pastrami”: Rye seed pancake, red wine braised cabbage and “thousand island vinaigrette”” which was one of my favourite dishes of my trip thus far. I loved how the kitchen took traditional flavours but mixed it up with the ingredients and presentation to recreate the classic Reuben sandwich. 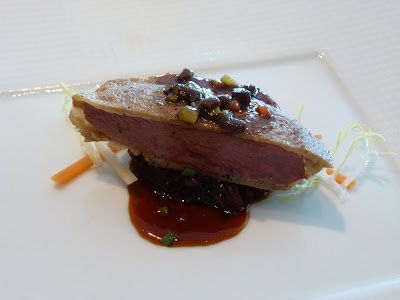 The sixth course was “Snake River Farms: “Calotte de Boeuf” picked garlic, poached seckel pears, broccolini and matsutake mushroom cream”. The beef was “fork tender” and just the right portion size, nice and dainty. Unfortunately for me, at this point, my dress is becoming uncomfortably tight and I needed to start leaving food on my plate. 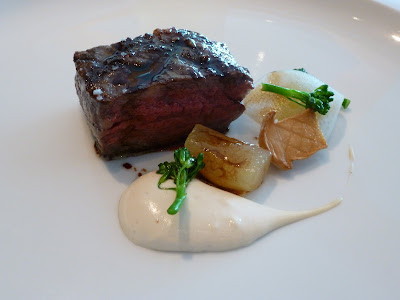 The seventh course was ““Caerphilly” sweet peppers, nicoise olives and arugula”. High marks for presentation but the cheese itself (from south Wales) was a little underwhelming. 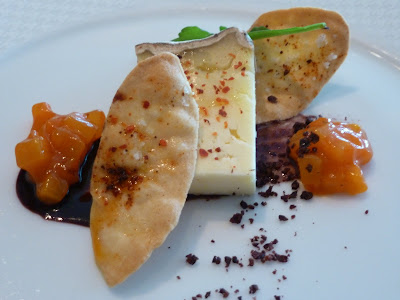 The eight course was “Honeyed Plums: Plum compote, honeycomb, whipped plums and burnt honey ice cream”. I didn’t expect to like this course but I was pleasantly surprised. However, I only ate half to try to save room. At this point, even the servers were asking me if I was OK or needed to stop. The couple on the table across for me had requested a 15minute break from the kitchen so they could go for a walk. 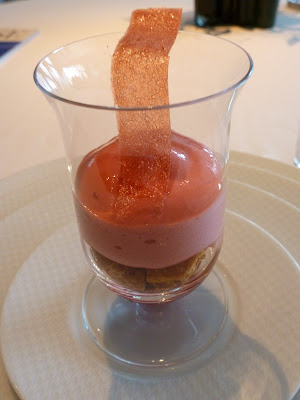 The ninth course was “Strawberry Yoghurt: sable breton, tri-star strawberries, crystallized lemon verbena and greek yoghurt sherbet” which was one of the best desserts I’ve had on this trip. It was light and refreshing and the perfect way to finish the meal. 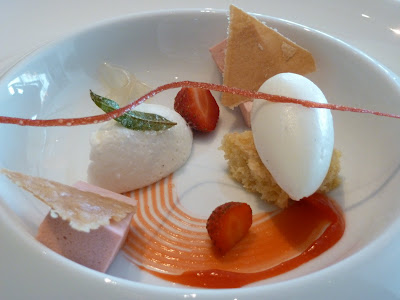 Of course, however, the meal was not over. It was time for the mignardises. Usually, just a bite or two, the mignardises at Per Se consisted of six different servings.

First up was an entire platter of chocolates (27 different types in total) for which I was able to choose which I would like. I settled one three, a marzipan, a pina colada and a raspberry chocolate. 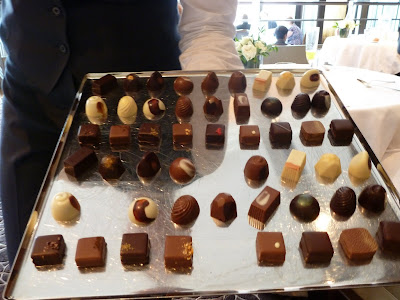 Following on was white chocolate coated popcorn which were simple yet satisfying. 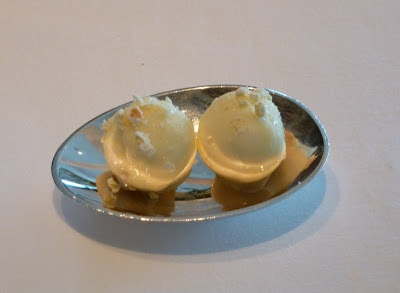 Another signature dish was next, “Coffee and Doughnuts”. The donuts were small warm bite-sized mouthfuls and the coffee portion was a cappuccino semifreddo which was refreshing and light. 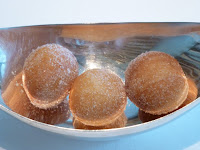 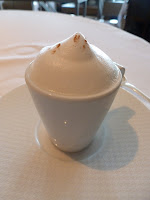 Next up was a huge selection of truffles and macaroons, then candy, cocoa coated hazelnuts and cookies with chocolate ganache. I officially surrendered at this point and asked for the remaining items to take home as I was beyond full. 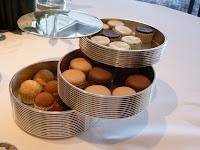 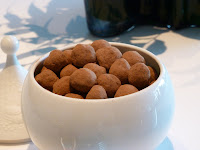 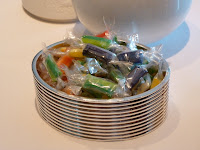 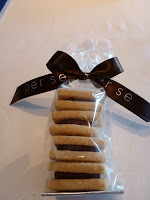 After the meal, I was given a tour of the kitchen and was able to meet the Chef which was lovely. I was amazed by how large the kitchen was, especially in a local where the rent would be astronomically expensive. 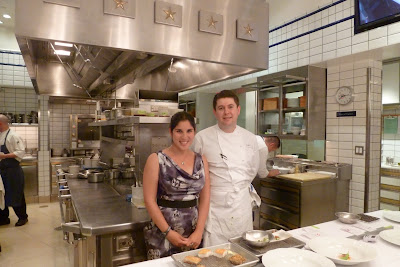 All in all, did it live up to my expectations? Without a doubt! I enjoyed the style of the food at Per Se more than some of my European meals and the technique, flavours and service were world-class. But what else could you expect from one of the world’s best restaurants? 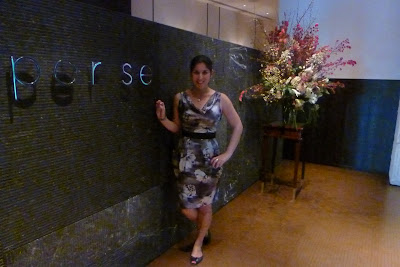