It was my last night in France and I wanted to eat somewhere truly special. Le Chantecler is the signature restaurant at the Hotel Negresco which is considered the finest hotel in Nice. It is been awarded by Michelin and was also listed in my Les Grande Tables Du Monde 2011 book which was given to me at Arzak so my expectations were high. Les Grande Tables Du Monde describes Le Chantecler as:

“The magnificent setting of the Negresco hotels holds a jewel of gastronomy: the Chantecler. In a “Regency” period décor filled with artwork and woodwork by famous designers, the dining room is an invitation to a rare gastronomic experience. Jean-Denis Rieubland, winner of France’s 2007 Best Chef Award, offers a cuisine that is both novel and rich in traditions. Tableside, Olivier Novelli is there to provide his attentive precise and friendly service. In their expert hands, seafood and farm produce come to reflect the passion and the commitment that motivate these men. Each dish then becomes an initiatory journey lined with discoveries that awaken unique and distinctive sensations.” 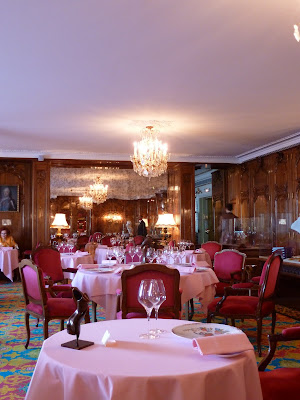 I was welcomed warmly by the dining room manager, Olivier Novelli, the chef sommelier, Lionel Compan and my two waiters when I arrived and was shown to my table which had a lovely view of the interior of the restaurant and also of the promenade. 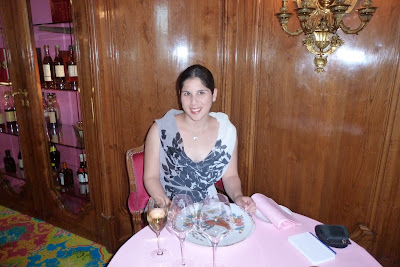 Once seated, a champagne cart was wheeled to my table and I was offered a choice of two champagnes as an aperitif and I selected the Duval Leroy 2004 which was very fine and smooth. To accompany the champagne was a selection of canapés: salmon maki, foie gras mousse and sparking chocolate and melon water with jamon. The size of each was very delicate and the taste was a wonderful prelude of things to come. 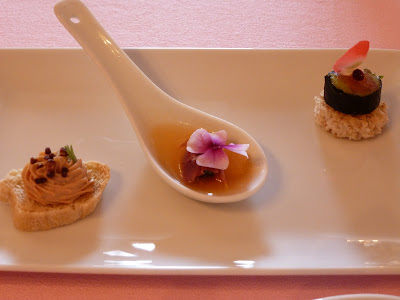 Olivier presented the menu to me and explained it in great detail, noting the specialties of the house and the a la carte courses that have won awards for Le Chantecler and Chef Rieubland. There were also two set menus offered: "Le Chantecler" which is a set four-course menu, and a seven course "Discovery Menu" simply described as “Presented in tasting portions, our Chef is an innovator and regularly adapts his specialties for your pleasure”. No further details were provided. I did not feel any pressure from Olivier to order anything in particular or within a price range, but did not hesitate in ordering the Discovery Menu. Oliver asked if there was anything that I didn’t eat; I lied and replied “No”. I asked to be placed in the hands of Chef Rieubland and would be happy to try whatever he decided to sent out. So I sat back and hoped for the best……

Immediately, my waiter brought over a selection of breads to accompany my meal: rosemary, olive, wheat or baguette and that was quickly followed by the amuse bouche which was an asparagus cream with fresh asparagus. It was foamy and light and took best advantage of the now in season vegetable. 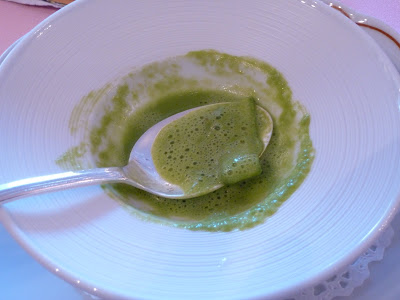 All of the staff at the restaurant were very friendly and would talk to me in between courses as I was dining alone which was most appreciated. Olivier also gave me a copy of the Negresco magazine to read which details the history of the hotel, recent news and had a few feature articles on Le Chantecler. I found that to be very considerate.

The wine list is as thick as a phone book and weighs just as much. The Sommelier, Lionel, advised that wines were available to be purchased by the glass so I ordered Les Deux Tours Sauvignon Blanc 2009 which was fantastic, very light and crisp. I usually stick to NZ Sauvignon Blancs but will now have to consider the French varieties as it was splendid.

The first appetiser was a Duo of Blue Lobster cooked like carpaccio; served with orange ginger flavoured jelly, broad bean bavaroise, citrus fruits marmalade and gold leaf. The combination of the citrus and the lobster was lovely; clean and fresh, tasting like summer. 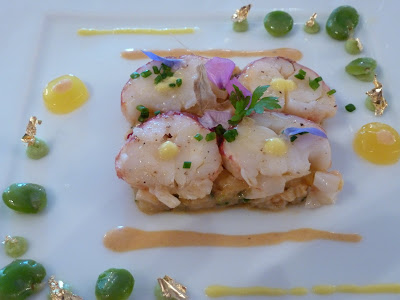 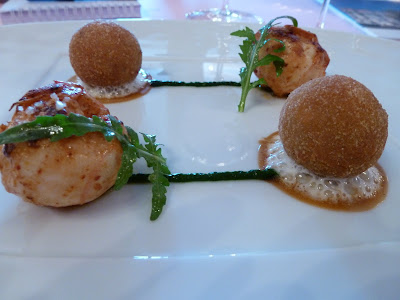 The restaurant was the finest example of silver service I have ever witnessed. The wait staff were dressed in coats with tails and the main courses were presented under cloche. If you needed anything, the service was instantaneous but not hurried. You knew that the staff were always watching and being attentive, but you didn’t feel like you were being watched. It was the perfect balance. 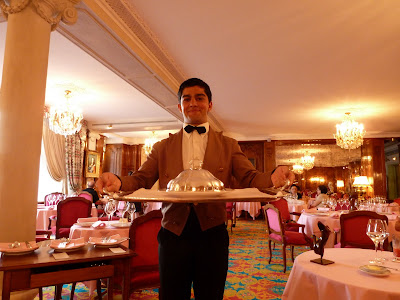 For the fish course, the chef kindly sent out another signature dish: John Dory grilled with basil oil and served with champagne sauce, together with zucchini cannelloni with Aquitaine caviar and turned vegetables (carrot, zucchini and pink potatoes). The fish was perfectly cooked and moist, with expertly applied grill marks. 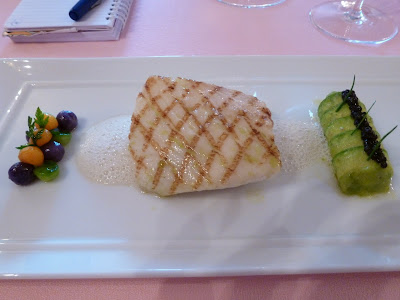 The meat course is an award winner for Le Chantecler: Veal sweetbread studded with chorizo, fricassee of chanterelle mushrooms and pearl onions, golden-brown macaroni and braising juice. I now understand what the fuss is about! It was delicious. The chorizo imparted a meaty flavor into the otherwise smooth and mild sweetbread. 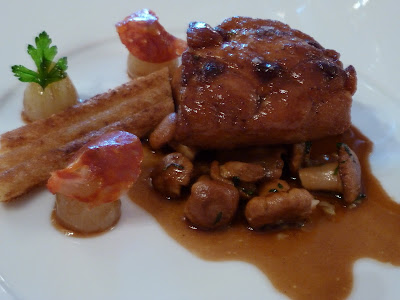 The cheese course was Burrata from Italy simply served with salt and rocket. It is a very smooth cheese that lacks texture but it was a nice light course to prepare for dessert. 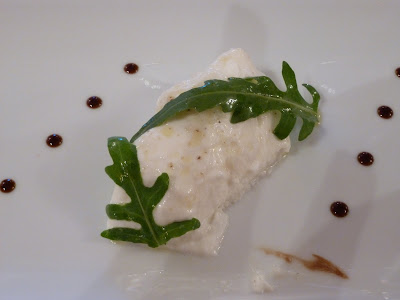 The pre-dessert was a petit crème brulee of Tahitian vanilla served with raspberry sauce and fresh raspberries – what’s not to like? 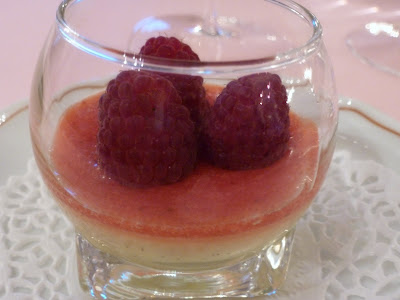 I had noticed that Chef Rieubland had been kind enough to send out his signature dishes for my tasting menu so I was hoping that my good fortune would continue for the dessert course. The patisserie chef, Jean-Charles Boucher, also has an award-winning signature dessert: the Blown Apple: “sugar blown like glassblowers do and fashioned in the shape of forbidden fruit”. A hollow apple concealing within the fruit in every conceivable form: “green apple spume, apple flambéed in calvados, strudel with almonds, Breton shortcake with fine sea salt, and Granny Smith sorbet”. It was culinary artistry at its finest and the attention to detail was incredible – even the stem of the apple had been blown from sugar. Simply exceptional! 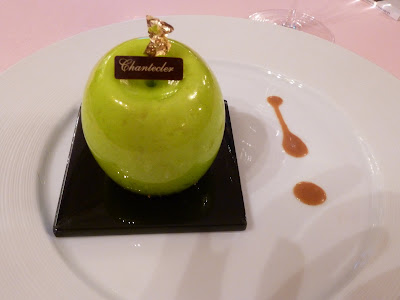 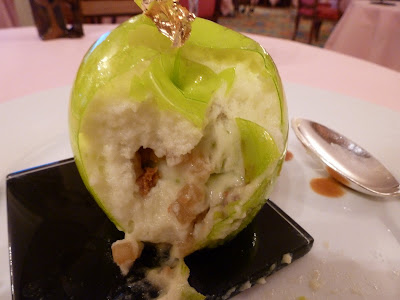 Finally, it was time for the mignardises and another cart was wheeled over to my table displaying a large assortment of confectionary, petit fours and fruit. I only nibbled on a few as I was too full at this point. 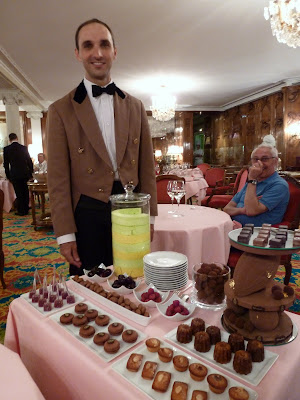 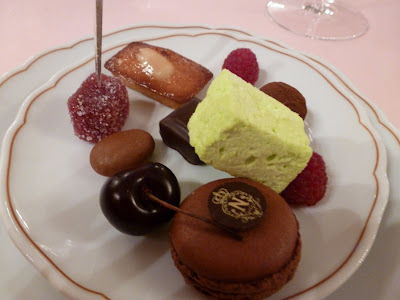 I cannot speak highly enough of Le Chantecler and would recommend it to anyone travelling to the French Riviera. The food and the service were both exceptional and I truly appreciated how welcoming they were to me as single diner. When Chef Rieubland was outside the dining room, the staff immediately informed me and asked if I would like to meet him. 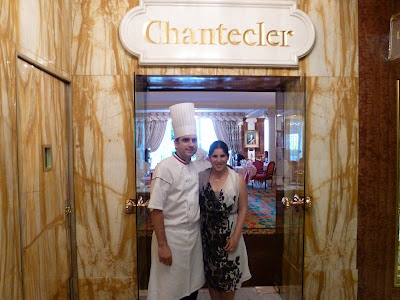 As I was leaving, I was thanked graciously by the staff and also given a box of Negresco chocolates to make with me as a souvenir. 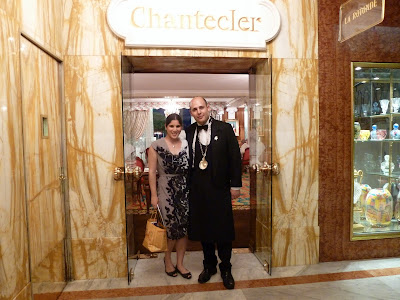 Sommelier Lionel Compan and I

The whole experience was truly wonderful and I hope to return when I am next in Nice. 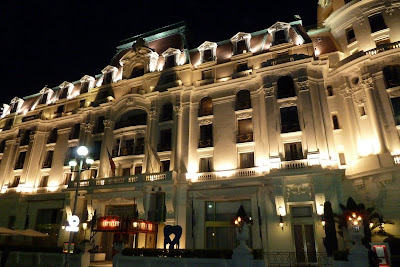 I did have one criticism though, and it wasn’t of Le Chantecler but of one particular staff member at Hotel Negresco. I have put it at the end of the article as I didn’t want to tarnish to review of the meal with a negative comment up front. In booking and confirming my reservation, all the staff that I dealt with were courteous and professional with the exception of the hotel doorman who almost refused to let me into the hotel the day prior when I sought to confirm my reservation in person, for no apparent reason. The level of snobbery and presumption that he showed was inappropriate especially given that I was dressed nicely (in the same dress I wore to Arzak) and not in swimwear like other guests that he happily opened the door for. I was instantly reminded of the now famous incident when Condelezza Rice went into a shop and asked to see the earrings. The clerk showed her costume jewelry and when Condelezza asked to see something nicer the clerk reportedly whispered something snide under her breath. Condi is reported as saying "Let's get one thing straight, you are behind the counter because you have to work for minimum wage. I'm on this side asking to see to good jewellry because I make considerably more."