I chose to stay at the northern-most village, Monterosso Al Mare, as it seemed to be largest and has to longest beach. I also decided to splash out and booked into a 4-star hotel (I'd say 3-star by Australian/US standards) Hotel Palme just 50m back from the beach. Oh the luxury! My own room, my own bathroom, a queen-size bed instead of a bunk bed and no one to wake me during the night with their incessant rustling through their suitcases (seriously, anyone who stays in hostel and wraps individual pieces of clothing in plastic bags so they "rustle" every time they try to get something out, should be banned). But I digress.....

Besides the beach and crystal clear blue water, the main attraction of Cinque Terre is the famous hike between all five villages. Only 12km in length but advised to take 4-5 hours due to incredible changes in altitude throughout the hike. 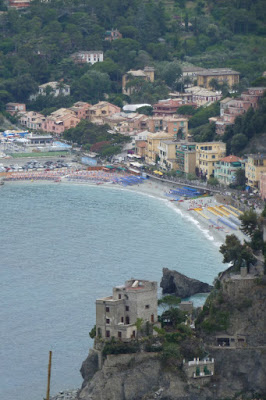 Looking down on Monterosso from the path to Vernazza 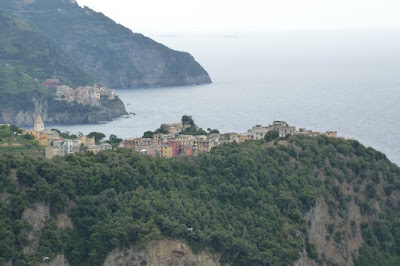 Corniglia (foreground) and Manarola (background)
By starting at the Monterosso end, you attack the hardest section first, with each subsequent section getting progressively easier. I pity the poor souls who start at Riomaggiore end as the last two legs would kill them. 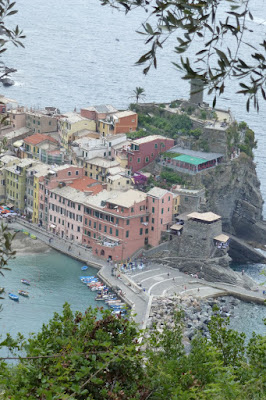 Vernazza from the hiking path from Monterosso 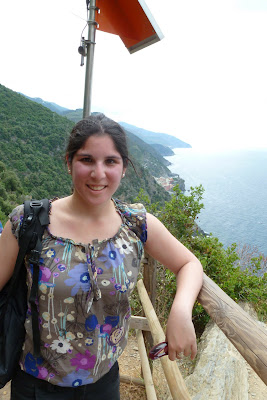 A little out of breath, but otherwise doing well
Being my first stop in Italy, I couldn't help but notice the obvious change from Nice (only a few hours away by train) and that some stereotypes did ring true. The women in Cinque Terre talk at a louder volume and gesticulate a lot with their hands (I now know that I can blame my Italian ancestry for my lack of a "volume" button). The food is decidedly different - gone are the eclairs and baguettes; in their place are foccacia, pizza and gelato shops every few metres.

I had spent the first six weeks of my trip promising myself that I would not eat gelato, pizza or pasta until I was in Italy and I managed to make it through 2 of the 3 in Cinque Terre.

For dinner one night, I headed to the Old Town in Monterosso to La Cambusa. Being in the Ligurian region of Italy, the culinary specialties are pesto, seafood, and a pasta called trofie (shaped like corkscrews). I ordered the "trofie alla scampi" and it was truly wonderful; packed with flavour and the pasta perfectly al dente. It was a real eye-opener into how little variety of pasta (shapes and sauces) we have back home both in the supermarkets but also in the Italian restaurants. 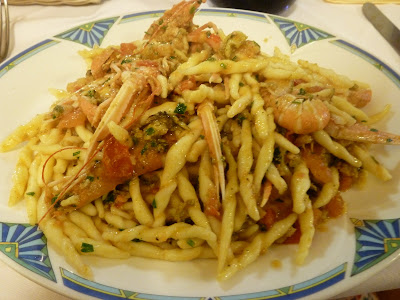 My "trofie alla scampi"
There was one glaring downside of the meal: the service. It was appalling. I was basically shoved in the corner of the restaurant and after my order was taken, the only time I saw the waiter was when he unceremoniously dumped the plate of pasta on my table. I had asked for a carafe of tap water for my meal to which he replied "no, we only have bottle, you have Acqua Panna". However, of course, when the restaurant started to fill up with the regular customers, they were all given complimentary carafes of tap water. The add insult to injury, a 2euro cover charge was imposed. Yes, that's right, even though you pay for your food and drink, you will also be charged for the privilege of sitting. 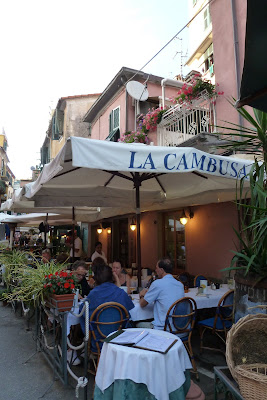 The exterior of the restaurant (where I didn't sit)
My second foray into eating Italian culinary stereotypes was the gelato. At the completion of my walk I decided to finally treat myself to gelato and I was delighted to see that you could order it in a brioche.

I had only tasted this once before, about 20 years ago, when my father took me to a culinary trade show. Yes, that was my father's idea of a good father-daughter bonding excursion! At the show, the brioche was filled with gelati and the whole thing was then put in a sandwich-press type machine that quickly heated the bread without melting the gelato. To this day, I have remembered how wonderful it was and was so delighted when I saw it in Italy.

Alas, however, it was not the same. The brioche came in a plastic bag (you know the type that has been sitting on a supermarket shelf for months with an almost indefinite use-by date), was dry and tasted like packet-mix and it was served at room temperature. Needless to say, I only ate the gelato which was lovely, but no different to the gelato back home (other than it's about 1/3 of the price here). 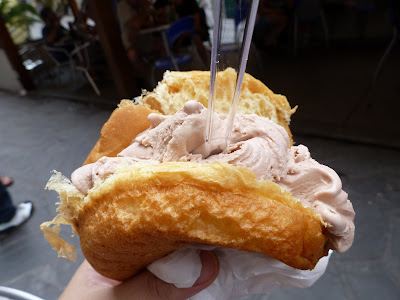 Nutella gelato in brioche
On my final day in Cinque Terre, I had booked a sunset cruise along the coast (with dinner). However, the weather turned ugly and it went from a peaceful little cove beach with no waves whatsoever, to a raging surf beach and the tide was so high the beach disappeared. As a result, the cruise was cancelled. Considering I'd planned my days so I was meant to lie on the beach all day on my final day, it did put a spanner in the works but there was still plenty to explore. 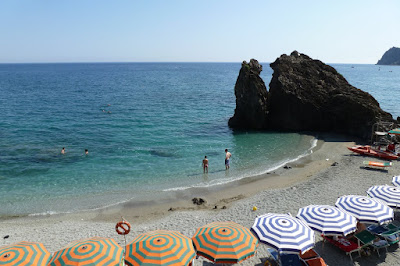 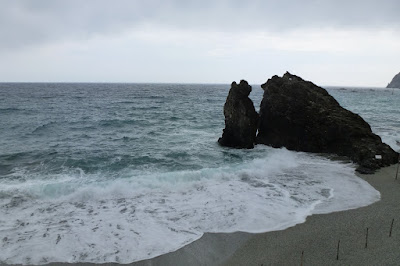 The southern end of Monterosso beach (on my planned "beach day")
Posted by Emily at 7:05 pm