Situated high on Mount Igueldo, overlooking the sea, Akelaŕe is one of three 3-star restaurants in San Sebastian (with Arzak and Martin Berasategui being the other two). The kitchen is overseen by head chef Pedro Subijana who has masterfully combined the finest local ingredients with modern culinary techniques and impeccable service. 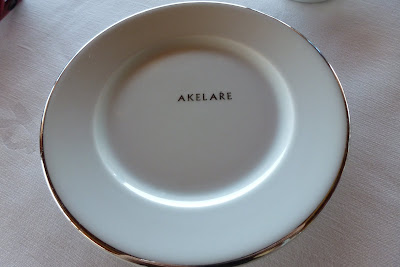 Jonah and I were promptly seated at our table with a clear view to the sea; the restaurant relies on the natural light from the floor-to-ceiling windows which made the space feel warm and allowed for uninterrupted views. 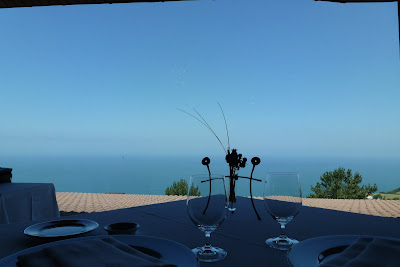 The view from the table
Akelaŕe offers two tasting menus and each person on the table can order whichever they please (a departure from many restaurants that require all patrons to eat off the same menu). Jonah ordered the "Aranori" menu whilst I ordered the "Bekarki" menu. Even though Jonah and I had only known eachother for about 18 hours at this point, we both emphatically agreed to share both menus to maximise the experience1.

The appetizers were the same on both menus and were presented very playfully. Representing a pharmacy, we were served Tomato and Basil Gel, Idiazabal Cheese Moisturiser, Sea Bath Salts, Mouthwash Cocktail and a Sponge. 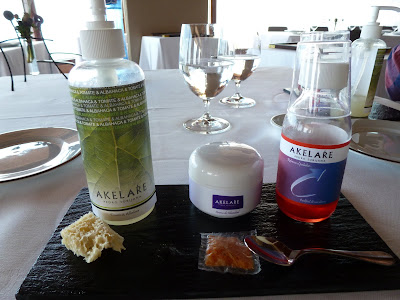 The Gel was smooth with an intense flavour that was advised to be pumped out of the dispenser and onto the Sponge made of crispy onion bread. Jonah and I both loved this and lamented that we wished we had more bread, but realised that it would be unwise to fill up on bread so early in the meal.

The Moisturiser was a creamed Basque sheep's cheese that was strong in flavour yet very smooth.

The Sea Bath Salt was consisted of dried prawns held together by potato paper. Once in the mouth, the paper dissolved and the prawn flavour burst through.

Lastly, the Cocktail consisting of Cava and Grenadine which was very light and cleansed the palate.


I loved the presentation of the appetizers; it was fun and playful and each element was delightful to eat.


After the appetizers, we were offered a selection of breads (white, wholemeal or multigrain) served with the finest olive oil I have ever tasted. The bread offering was endless through the service but I felt very few courses required it.

At this point we were also offered a detailed "running sheet" of the menu in English with full descriptions of each course. I have listed these below as provided by Akelaŕe in italics.

First Course - Aranori Menu "Prawns and French Beans cooked in "Orujo" Fireplace: Peeled in the tail, cooked in front of the guest in the dining room, with wine spirit. We recommend to suck the head and to accompany the tail with the green beans and the green beans cream." 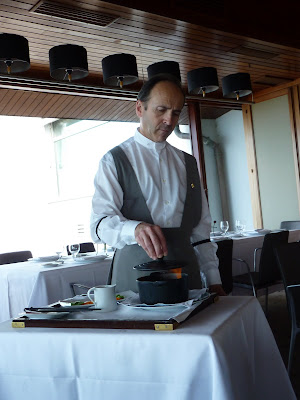 Our waiter, cooking the prawns tableside over lava rocks

The prawns were cooked perfectly and the beans were a nice accompaniment. The powered prawn shells were extremely intense and although I enjoyed it, if you weren't a fan of seafood, it may be a little overpowering.
First Course - Bekarki Menu

"Xangurro in Essence, its Coral Blini and "Gurullos": The crustacean's meat is reinforced by its juice. Accompany with the pasta that looks like rice grains."

The crustacean meat was very flavourful and the blini had a soft palatable texture. The coral imparted quite a "fishy" taste but it wasn't unpleasant. The grains were fluffy and perfect for soaking up the leftover essence. 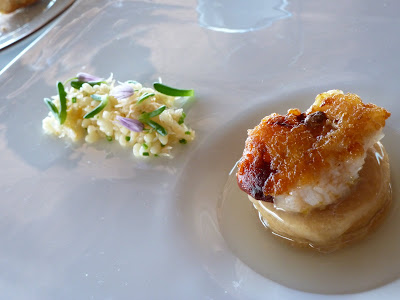 "Molluscs in Fisherman's net: Open mollusks on charcoal fire, with a cream of rice and borage, covered by a net in which there are some remains of the sea."

Visually stunning, the taste of the ocean was present in every bite. Under the net were prawns, clams, oysters and goose barnacles to name a few. Dried shrimp and seaweed were placed as though "caught in the net" demonstrating the high attention to detail present. 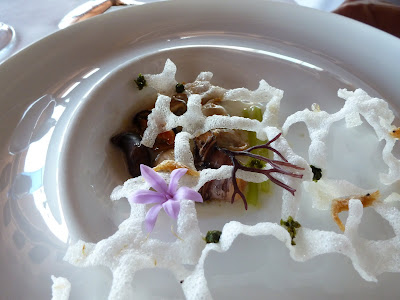 The menu description describes it perfectly; the veal shank was gelatinous, similar in texture to marrow whilst the razor clam had more bite and the "mushrooms" were shaved so finely they melted in the mouth. Textures, flavours, contrasts..... 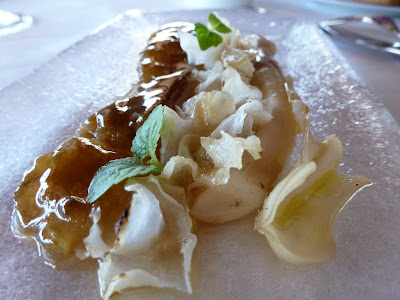 Jonah had ordered this course without the meat as he is pescatarian. Nevertheless, it was perfect and I didn't feel as though it was missing an element. I have no idea how Chef Subijana can make pasta taste so "meaty". It was a strong course both taste wise and technique. 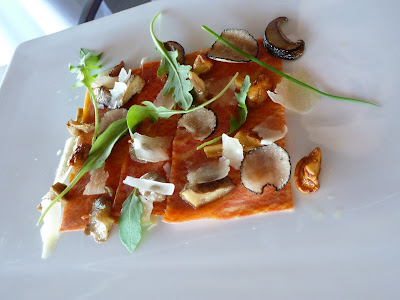 The Foie Gras was seasoned tableside and as the waiter poured on about a tablespoon of "salt" I was tempted to ask him to return it to the kitchen for ruining a perfectly good piece of foie gras. Of course, not everything is as it seems....the salt was a type of crystallised sugar (not as sweet as table sugar though) and the pepper was made from puffed black rice.

The sugar complimented the fattiness of the foie and the pepper provided a welcome textural crunch. I loved this but could only eat about half as it was simply too rich (especially given that we weren't even halfway through the meal at this point). 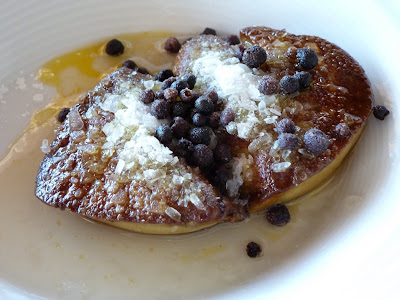 I have yet to see a menu in a restaurant in Basque country that doesn't list cod. This preparation was very well done. The "tripes" are pieces of cod that have been moulded to resemble tripe and are quite soft in texture whilst the fillet of cod has retained its usual firm texture. 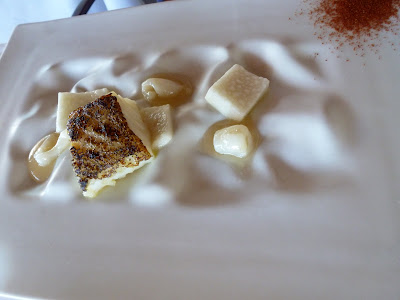 ""Fried Egg" with Green peas, little farm vegetables: Eat the Vegetables in two parts, the leafs as a salad, the fruits al dente. Try the baby peas by themselves. What a sensation! Break the egg and eat it with the peas."

This course was tasty, but safe. Fresh off my experience at Etxebarri and no longer recoiling at the sight of peas on my plate, I was open to enjoying this course. The egg yolk combined well with the peas but overall I wasn't inspired by this course. Perhaps it was a little too rustic compared with the other innovative courses. 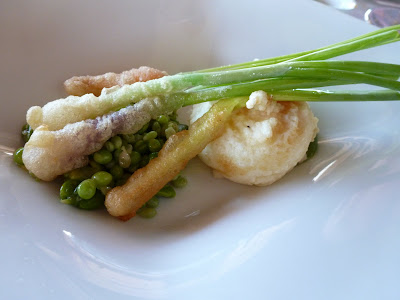 "Turbot with its "Kokotxa": The preparation is made entirely with Turbot, including its "kokotxa". Pil-Pil sauce. A crispy chip of its own skin."

We had asked for some menu substitutions in the Aranori menu to remove the meat course; accordingly, this was the fifth course for both of us.

"Kokotxa" is the cheek of the fish but the turbot is "cheek-less" so the chefs have created their own. The fish was cooked well and the "cheek" was the highlight of the course, soft and gelatinous in texture it combined well with the sauce and firm flesh of the turbot. 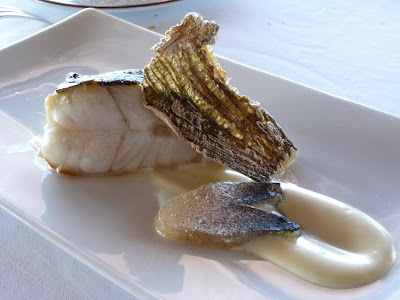 Sixth Course: Aranori Menu (usually the fifth course, with the sixth as the meat course)

The "fusillis" were the heroes of this course. Consisting of a firm jelly, each one was overflowing with intense flavour of soy, parsley or garlic and although solid, provided the "sauce" for this course. 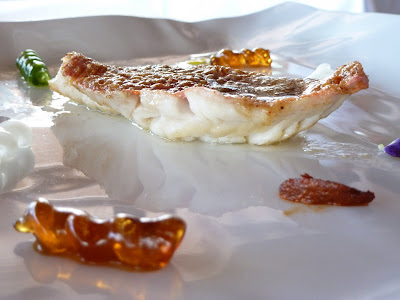 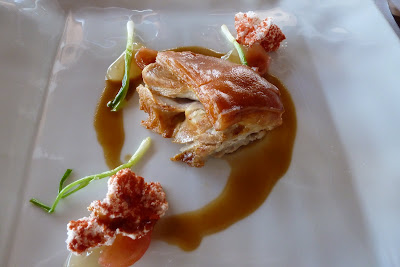 ""Xaxu" and Coconut Iced Mousse: Tolosa Traditional little cake with the permission of Gorrotxategui pastry chef. We have recreated: egg and almond with a side of Coconut Ice Cream"

The sphere in the centre oozed egg and almond whilst the ice-cream was airy and light and dissolved on the tongue. I don't know what NASA type technique Chef Subijana has used on the ice-cream but it was wonderful. 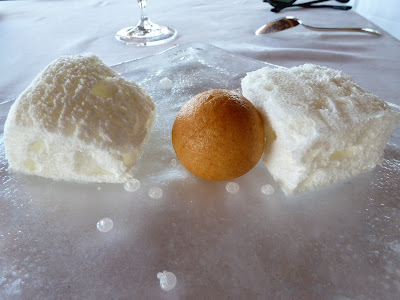 "Milk and Grape, Cheese and Wine in Parallel Evolution: Grapevine, curded sheep milk and walnut. Powered fresh cream with chive and grape. Quark cheese with nutmeg and pink pepper aroma, must of tapioca and tomato. Idiazabal semi-matured with wine jelly and wine dust. Torta of Casar's grape with soaked raisins in Pedro Ximenez. Brandy sirop with Gorgonzola cheese ice cream. Start from the left to the right to recognise each and every of the different flavours that the milk has, as well as the transformations that the grape and milk suffers from the origin up to the oldness."

Though I love cheese and grapes, I was disappointed with this dessert. In order to show the evolution from milk to cheese, and grape to wine, there were some really bland elements to this course. Unfortunately, the strength of the other elements wasn't sufficient enough for me to fully counter the weak points and my disappointment. 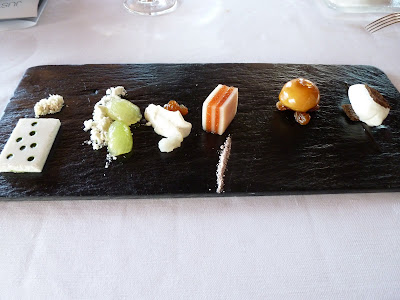 "A Different Apple Tart: Puff pastry toasted-apple cream-puff pastry-and our house made eatable apple paper. The traditional apple tart is very good, but we have made a new one. Our apple tart does not have fresh apples but tastes much more than others."

Without doubt, Chef Subijana has created the greatest puff pastry in the world. It was light, crisp, clean and didn't leave any fatty residue in the mouth. The Akelaŕe paper was intensely apple flavoured and reminiscent of dried fruit rollups that children pack for school lunches. I love apples when fresh but have never enjoyed apple tart as I don't like the soggy apple texture. In this dessert, all the flavours of the apple are present, without the sogginess. I loved it!! 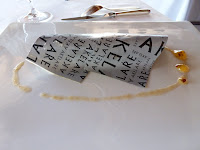 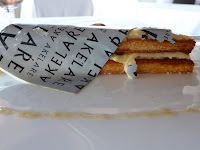 Commonly, chocolate dessert courses are rich and heavy. This, however, was not. Whilst the small quenelle of fine dark chocolate ice-cream was rich the other elements balanced that richness especially the shell filled with intense citrus cream. 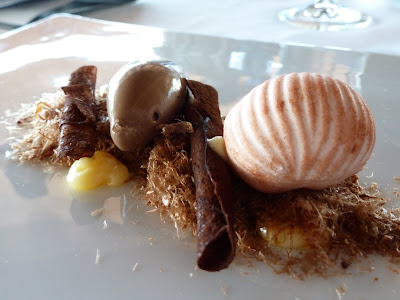 During our meal, Chef Subijana came to our table to ask how we found the meal. Jonah, being fluent in Spanish, was able to convey our enjoyment and also how far we had each travelled to dine here. 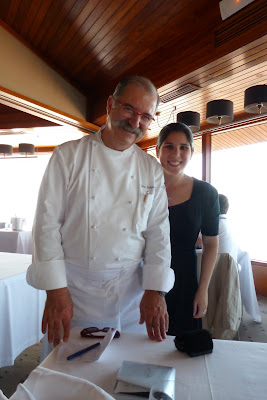 Although both full, Jonah and I were able squeeze in the mignardises which were served in a bowl covered in pear "fruit rollup". The waiter cut this open table side and once eaten, revealed a selection of 5 types of chocolates and candies. My favourites were the chocolates filled with banana and the passionfruit jellies. 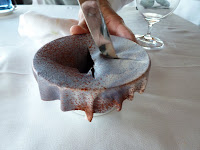 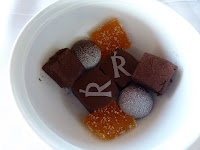 The service at Akelaŕe was professional and efficient without being stuffy. They were genuinely happy to have you dining with them and made every effort to ensure our experience was perfect. All the staff we encountered spoke some english (and french) and even though Jonah was fluent in Spanish, they would address me in english rather than simply relying on him to always translate.

Akelaŕe was the last of my three great meals in San Sebastian. I have been trying to determine which meal I preferred of the three and it is impossible to compare as they are all so different. Akelaŕe and Etxebarri have spectacular views, Arzak does not. The service was faultless in all three but Arzak and Etxebarri had more warmth. Arzak had higher highs but also some disappoinments, whereas Etxebarri and Akelaŕe were consistent.

I can say this though....did I have one of the finest meals of my life? Yes.
Can I recommend it to anyone travelling to San Sebastian? Yes.

If I returned to San Sebastian, would I eat here again? Probably not; whilst I would prefer to try Mugaritz or Martin Berasategui before coming back to Akelaŕe, I think Arzak and Etxebarri will always have the top two spots in my heart.