After touring the sights of Rome for four days it was time to head south. I stayed at an amazing hostel (why can't all hostels be like this?). There is a sundeck, two bars, four common rooms, the cleanest bathroom I've seen thus far and the hostel organises private boat cruises to Capri daily.

I decided to join the charter for a day of swimming, snorkeling and sightseeing for Capri. After a group of angry Canadian's insisted of having a private tour and kicked us of the boat (a long story but suffice it to say that they were very rude and insulting and have upset all the staff and most of the guests here over the past few days). Accordingly, the rest of us (a Taiwanese couple and two other single girls) were put onto another boat that can best be described as a rubber dinghy with a motor (like a Zodiac).

Our little 'boat that could' was very small so we felt every wave and bump and I was violently ill (twice) on the way to Capri. It is one of the worst feelings in the world and I desperately wanted to reach dry land, or even drop anchor as swimming would have been more enjoyable than rocking in the waves.

The blue grotto was closed on the day we visited but we sailed past it and other small grottos before stopping for some swimming. 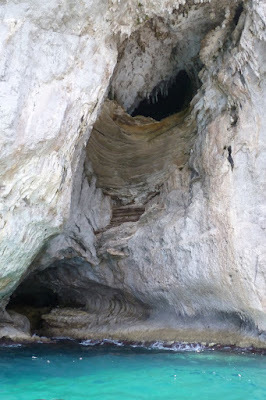 We then headed for land (thank goodness) and spent about 3 1/2 hours touring Capri and Anacapri. I used the time to try to settle my stomach and double-dose on travelcalm pills so I was good to go for the boat trip back. 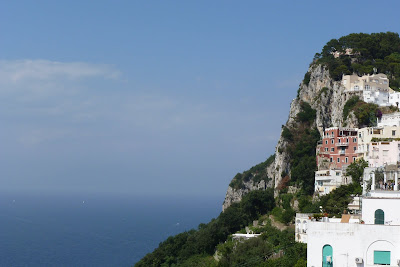 The view from Capri 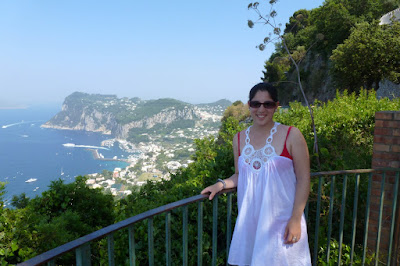 The view from Anacapri
The waves had picked up significantly on the return trip and it was quite a wild ride on the way home but enjoyable as motion sickness was no longer an issue. Upon arriving, we spoke to the captain about our charter and how it was not what we were promised (i.e. no nice boat, no snorkeling) and he agreed and apologised profusely providing us a significant discount. 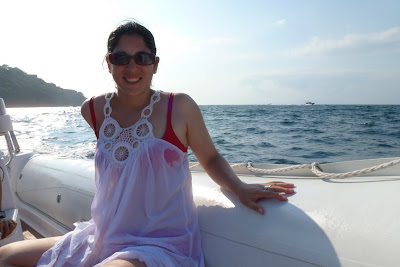 Even with our dodgy little boat, the day was highly enjoyable and a lovely way to see Capri. However, no matter how hard I try to convince myself that I do not need motion sickness drugs, this boat cruise has proved once and for all that there is no such thing as "mind over matter" when I'm on a boat!