I have finally made it to Rome, the cradle of western civilization. As a city, I find it to be stunning and the mix of modern and ancient architecture is lovely. You may be walking down street lined with modern buildings, turn the corner, and there's a building that's been standing 2,000 years. 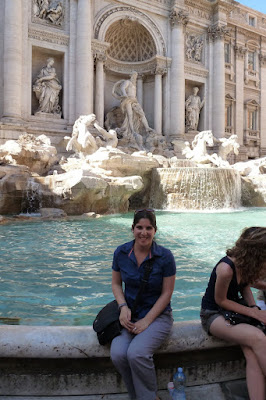 Trevi Fountain
For my first full day in Rome, I had booked tour of the Vatican with 7 Hills Tours (the number one rated tour guides on tripadvisor.com). Our guide for the day, Andreas, was fabulous! I can't imagine visiting the Vatican without a guide as you would miss out on so much detail and understanding.

We went through the grounds, the Vatican museum, visited the garage with the Pope-mobiles, walked past a Vatican/Australian tourism exhibit, and then headed for the Sistine Chapel and finally St Peter's Basillica. There was so much to see; from every piece of artwork to the way the ceiling of a hallway is painted, it is truly magnificent. 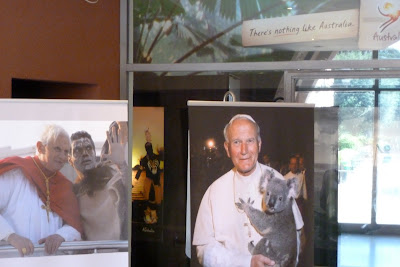 The entrance to the Australian exhibit

Our tour was limited to 20 people and we all very given those little headsets so we could hear the guide no matter where we were standing (embarassing but highly useful). I was struck with a sense of wonder and awe but it was also very humbling. I do know that words will not be able to articulate how special it was but there were two sights that stood out as my favourites:
Housed in St Peter's Basillica, the Pietà is Michelangelo's first sculpture of a number of works he created of the same theme and it is also the one piece of art I was most looking forward to seeing on this entire trip. It is beautiful; tragic but stunning. 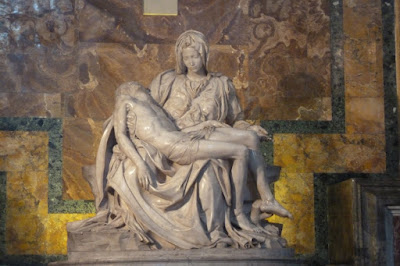 Pope John Paul II was beatified in May 2011 and his body has now been laid inside St Peter's Basillica (previously underneath in the tombs) and is a focal point for many pilgrims. 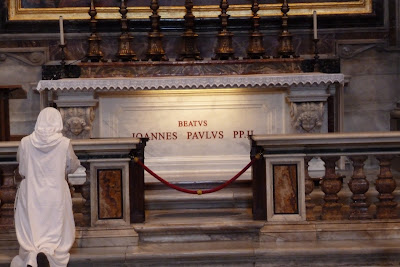 I cannot recommend enough utlising a guided tour when visiting the Vatican. Not only will your understanding be so much greater, but you get to skip ALL of the lines and I can't think of anything worse than standing in the hot Roman sun for 1-2hours just to enter the Vatican. 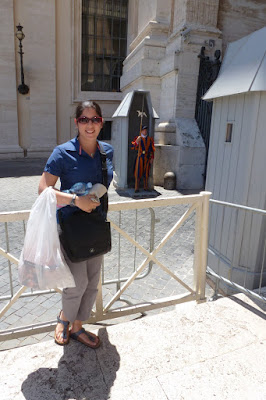 Standing infront of the Swiss Guard

Preparations for the papal mass
Without doubt, the visit to the Vatican has been the [non-food related] highlight of my trip thus far.

During my stay in Rome, I also took a tour of the Colloseum and Roman Forum; by booking in a tour, you are granted access to the underground levels and tunnels (where the slaves and animals were kept) that are not otherwise open the public. The guide was very quick to point out that whilst she LOVED the movie Gladiator, it was a highly flawed account of Roman history! 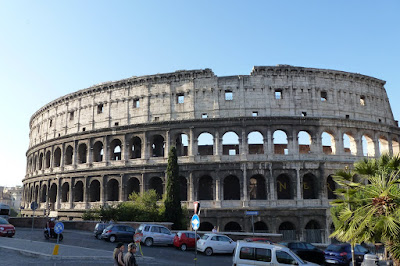 The outer ring exterior of the Colloseum
The rest of my time in Rome was spent shopping, eating and touring the city sights. Visiting Rome in summer requires a lot of patience, stamina and bottled water; it is crowed and very very hot. The concrete and stone that forms so much of the city retains the heat and the surface temperature can be many degrees hotter than the official air temperature. 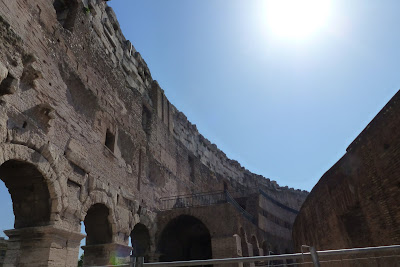 The burning sun over the upper stands in the Colloseum
On my final night in Rome, I headed back to the Vatican and St Peter's Basilica as I wanted to spend more time visiting it than the guided tour allowed. As I arrived, the guards were closing off the front of the church becuase mass was about to commence. After inquiring if I could attend mass, I was let through.

It seems that a lot of other tourists realised this "trick" and quickly informed the guards that they too would like to go in mass. In reality, they walked right up the centre aisle as the priest was talking, took photos with their flash on during the service and one even answered his cell phone before exiting. This pattern of behaviour continued during the full service as new rounds of tourists were enter, disrupt and leave. I found that lack of respect to be simply astonishing.

In any event, the service was beautiful and, for me, it was truly special to be able to experience it.