A Tale of Two Cities: Pisa and Lucca

It was check-out day in Cinque Terre and I was torn between one final long sleep-in in my lovely queen size bed and the feeling that it was somewhat irresponsible to not make the most of every minute of this trip and therefore leave the hotel early so that I could visit Pisa. I had to change trains there anyway so I decided that I really should see it (if only so I could say that I had).

In short, Pisa is a dump, Desserted, old, vacant - dead. There were no shops open, nobody in the streets, no traffic, nothing. If it wasn't for the odd tourist making the trek from the train station (like ants on a window frame all following the same path), I would have thought that I was on the set of a post-apocalyptic movie. It's only when you are within 50m of the tower, that the usual hawkers pounce and there is some life to be seen. For a town that's whole claim to fame is basically a construction job-gone-bad, I really didn't see the appeal. 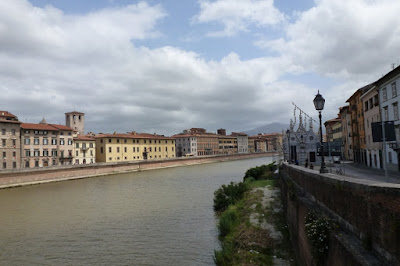 Where are all the people?
Needless to say, it took 20mins to walk to the tower, 2 mins to get a photo and 20 mins to walk back to the station. Sitting on the train platform for half an hour, reading Kitchen Confidential by Anthony Bourdain and eating an orange was actually more enjoyable that visiting the town of Pisa. Perhaps I was just there at the wrong time. It was a Sunday; perhaps the entire village decided to stay in that day or the priest gave a really really long homily at mass and everyone was still in church. I'm glad I went because now I can say I've seen it, but I can't recommend Pisa for a visit. 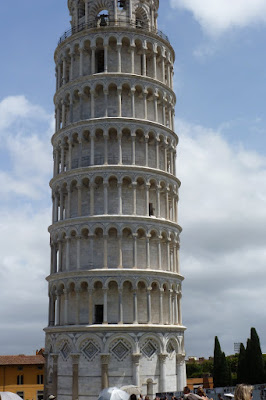 The world's most famous construction mishap
Lucca, on the other hand, is absolutely lovely. Before I left Australia, my friend, James, was adamant that Lucca was a fantastic city to visit and I am so glad that I followed his advice and made the effort. It is only accessible by regional train and about 1/2 hr from Pisa and 1 hr from Florence. Located in Tuscany, Lucca is famous for it's still intact city walls (from the Renaisssance era). With the miltary importance of the walls now lost, the walls are used as a pedestrian and cyclist promenade that circles the old city. 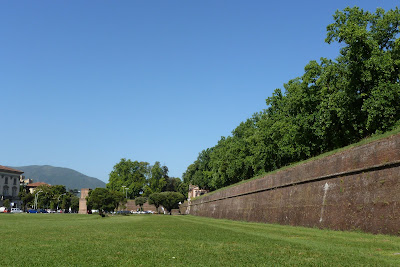 The view from outside the city walls
Inside the city walls, the town is filled wih old and winding alleys and lots of little shops. The hostel I was staying at helpfully listed the directions from the train station as "only a 15 min walk" and nothing else. I had a mud-map from google but after 20mins of going round in circles and unable to find any of the streets on my map, I jumped in a cab. I'm sure I got gypped though as he seemed to do a huge circle around the town and drove for quite some time considering how small the old city is. When we arrived, he mysterisouly added another 4euro surcharge (he said it was for my bag and because it was a Sunday). I remain highly doubtful!! 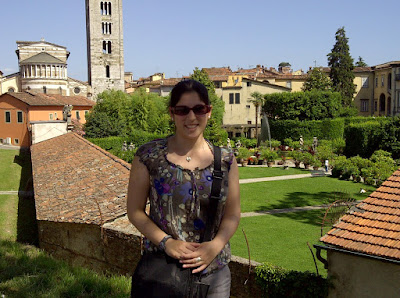 The view on top of the city wall
But I digress...Lucca is picturesque. After finding the hostel, I walked around for a while and then hired a bicycle to ride around on top of the city walls. Lucca reminded me a lot of X'ian with it's wide city walls that are now pedestrianised. After cycling for while, I headed for the shops and found the pasticerria. 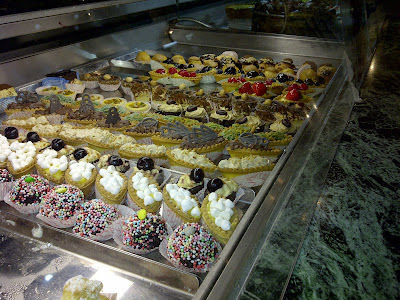 A tiny selection of the goods on offer
In short, Lucca is a romantic town. It's old streets and winding alleys belong in an era past and it is so charming. Unlike Pisa, I can happily and strongly recommend a visit if you are ever in northern Italy and I could definately consider returning. 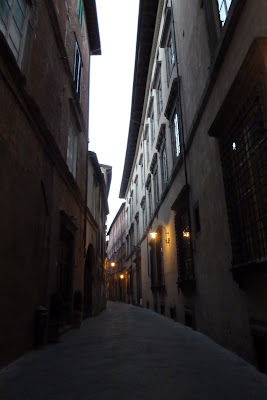 Lucca at twilight
Posted by Emily at 7:05 pm