I’ve been in England for a few days now and I must admit that I am yet to experience anything resembling the often maligned “bad food” that so many had warned me about. In actuality, the food thus far has been the opposite, absolutely wonderful.

On Saturday night, the cousin that I was staying with hosted a dinner party for another three couples. I battled to stay awake lasting until the cheese board was served but had to excuse myself at that point as I was desperate to sleep. The food was lovely!

The next morning as we were driving to Dartmouth, we stopped along the way at the house of Paull & Margaret (who were one of the couples from the night before). They live in quite a stately home and the house had a lot of character; I felt as though I was in a British movie from an era-past. Margaret had kindly cooked us some soup for lunch, followed with a selection of English cheeses and a rhubarb crumble; all of which was delicious. Paul & Margaret were also kind enough to give me their copy of the 50 Top Restaurants of the World so that I can plan my culinary adventures!

With satisfied stomachs, we headed back to the car and drove to Dartmouth to stay with another cousin (John) and his family. After swapping stories and the obligatory hand-over of the Aussie chocolates that I brought, John, Anna (his wife) and I headed out for dinner to Wildfire which is located on the marina at Dartmouth. The view from the restaurant was gorgeous! 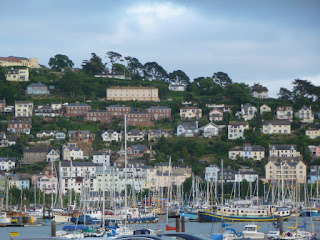 I ordered the Fillet of Salmon with shrimp, caper nut brown butter sauce which was divine. It was served on a bed of sauteed spinach and the fish was perfectly cooked. 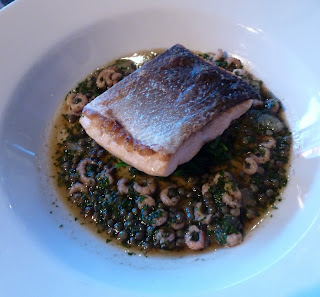 Anna ordered the Luscombes of Totnes herb crusted rump of lamb, celeriac and potato gratin and lamb jus also served on a bed of spinach. Lamb is a speciality in this region (together with seafood) and Anna was kind enough to allow me to sample her plate. The lamb was melt-in-the-mouth tender. 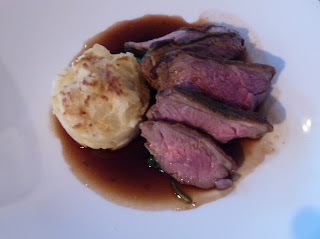 We all ordered desserts which were lovely (no pictures were taken as I was too busy eating!!) before heading home.