As I write this blog entry I am fighting the continual waves of sleep that threaten to overcome me after about 44 hours of being awake. I need to last another 5 hours or so before I can rest to avoid jet-lag.

I arrived in the UK at 6.40am (an hour later than scheduled). One of the downsides of being an economy class passenger at the back of the bottom level of an A380 plane, is that there are about 500 people who get to line up at the immigration desk in front of you. When your plane is also an hour late, its new landing time will coincide with the landing of numerous other A380 planes.

Upon finally reaching the front of the queue, I was required to convince immigration that I was not planning on working in the UK, had a place to stay (even though I couldn't provide an address) and had sufficient funds to last my trip (after admitting I was an unemployed accountant). The relief of finally getting my entry stamp into the UK was shortlived when I saw the line up at customs to declare the tim tams and cherry ripes for the relatives!!

However, I have made it. I was met at the airport by my second-cousin, Helen who drove me to her house for some breakfast (and to meet the family) before heading to Woking train station to take the train to Sherborne (where I was met by two other cousins, Jane & Christine).

Sherborne is south-west of London on the way to Cornwall and Devon and is very picturesque. It is what I considered to be the quintessential English town with old buildings, a beautiful abbey and lots of pubs. 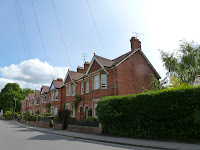 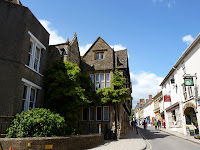 After strolling around town for a while, I headed to the one place where you can get a sense of a culture: the supermarket. There are two in town here, about 500m walk from each other. I know you cannot judge a country simply by the food in the supermarket... but I will note some observations anyway:


Overall, I got the impression that if I ever need a cheap feed whilst backpacking, the supermarkets are the place to go. However, if I wanted to live here and cook for myself daily, it would be a struggle. On a more positive note, there are a number of small artisan delis, bakeries and greengrocers in town who have a wide selection of products, and most notably, the european influence was very apparent (french cheeses, charcuterie etc).

So far so good -Sherborne is very quaint and I'm glad I got to see it. Tomorrow I'm off the Dartmouth before heading to London mid week.
Posted by Emily at 6:03 pm