On the backpacker trail, Amsterdam is famous for two things: marijuana and legal prostitution possibly making it an unwise choice as a destination for a single non-smoking female.

Despite advertising to the contrary, my hostel was smack-bang in the centre of the red-light district and the rooms had large curtains that faced street level, with working women on either side of our dorm. The room itself had a distinct “sweet” smell. I shared the room with 5 other males, all in various stages of “stoned-ness” and often bragging and comparing notes about their conquests with the numerous working girls during their stay.

However, instead of feeling uncomfortable or threatened, I found it hilarious. Two of the boys in the room were 18 year old college kids who were debating what they should do for the day. The conversation went like this:

B: “I don’t know, should me maybe see some sh*t other than the red light district?”

B: “Yeah it is, but that’s all we’ve done beside smoke weed”.

A:” How about we go smoke some more and then decide what to do?”

Amsterdam by day, however, is quite pleasant. I spent my morning taking a walking tour with New Europe and the afternoon sampling local cuisine and making a visit to Anne Frank’s house which was very moving. Whilst I am pleased I made a stopover in Amsterdam, I was glad to leave for Paris at the end of my stay (and to wash the pot out of my clothes). 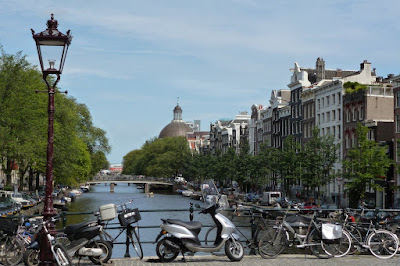 One of the many canals 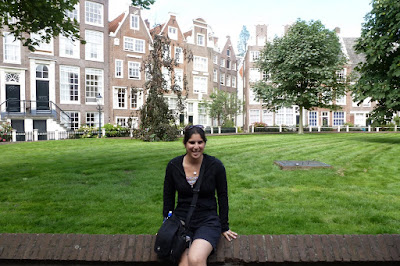 The park inside a religious sanctuary 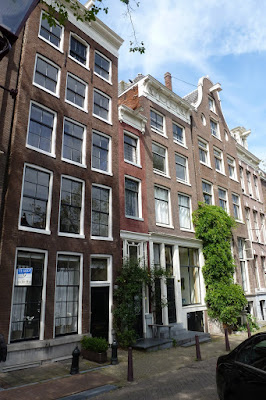 Amsterdam's thinnest house (the red one)
Posted by Emily at 7:42 pm

Email ThisBlogThis!Share to TwitterShare to FacebookShare to Pinterest
Labels: holland