Hurricane Irene may go down in the history books as "much ado about nothing" as the media buildup turned out to be much greater than the actual storm for most of the US East Coast*. For me, however, Hurricane Irene was at times terrifying and potential costly as travel plans were ruined.

I was staying in just north of central DC in Takoma, almost near Maryland. We were advised that our area was safe and that the storm will miss us, we might just get some rain.

In fact, we were at the centre of a ferocious lightning storm. One bolt struck so close to the hostel, items fell off shelves and the room flashed red, causing everyone to panic thinking the hostel was on fire. The windows were shaking and rattled with such force that we were convinced the glass would shatter at any minute.

In the morning, the electricity was out, fallen trees littered the neighbourhood and power lines were down across the street.

I was meant to take the train on Sunday morning up to New York but it was cancelled. Upon calling my NY hotel to advise that I was stranded, I was told "sorry, but you have a non-refundable booking and you will be paying for the room regardless of when you get here".

On Sunday, Takoma was without power but luckily the metro was running so we headed into town so we could find food and I charged my phone at the Smithsonian. 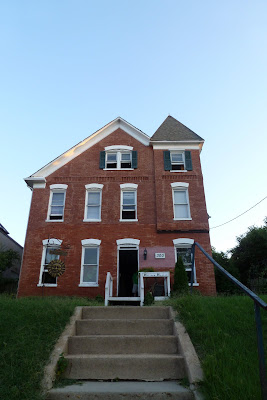 The hostel exterior; not much to do without electricity

My train was rebooked for Monday night but that was cancelled again. Fortunately for me, I had also booked a bus for Monday as a backup plan and that service was running allowing me to get out of DC. The same could not be said for the dozens of people in the stand-by line trying to get out of DC to NY as every bus was full.

Upon arriving in NY, I was amused to see that some entrepreneurial folks already had "I survived Hurricane Irene" t-shirts and badges for sale. Even more pleasing was that the very nice man at the front desk of my hotel decided to waive the charge for Sunday night (when I was stranded in DC). So in a way, with respect to my trip, things worked out for the best.

* For New York City only. Of course, the damage has been huge in other areas coupled with a tragic loss of life.