One of the problems with travelling overseas for a long time and not bringing your normal computer is that you are stuck with the same playlist on your ipod and can’t add any new songs. The two albums that seemed to have gotten the most play over my trip were the Wicked soundtrack and Idina’s Menzel’s I Stand. Given that Ms Menzel stars on both albums, when I realized that her tour dates lined up with my travels, I leaped at the chance to see her live in London at Royal Albert Hall.

Idina is best known as a Tony-winning Broadway actress, originating both the role of Maureen in Rent and Elphaba in Wicked. For the non-theatre types, she was Nancy (the other woman) in Enchanted and is currently seen in Glee playing the role of Shelby Corcoran.

First of all, the hall is spectacular. The interior is grand and ornate but the theatre is small enough that even the “bad seats” aren’t so bad. My seat was pretty far away but still had a decent view. 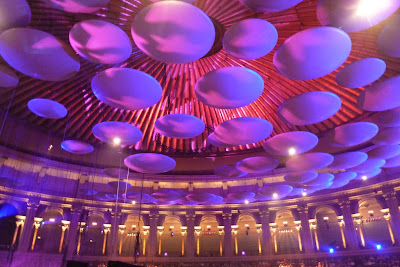 Idina was touring with Marvin Hamlisch, a famed conductor and one of few EGOTs (winner of an Emmy, Grammy, Tony and Oscar). He led the first act and was highly entertaining. After a short intermission, it was time for Act 2.

Idina graced the stage, in a white evening gown and bare feet. Her concert had a similar style to Bette Midler (without the cursing and “mermaid in a wheelchair skit”): she would tell a story to set up the song and then sing. 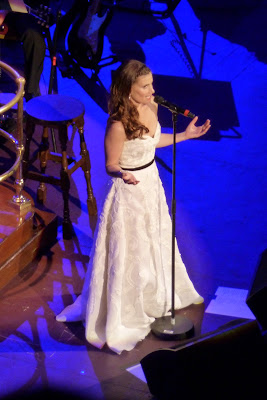 The set list covered her Broadway roles (Rent, The Wild Party & Wicked), Police, Streisand and others. Stories of how she unsuccessfully tried to seduce her college professor without knowing he was gay, or how Ms Streisand reacted to her rendition of “Don’t Rain on My Parade” were thoroughly entertaining.

Besides Defying Gravity, which of course was the “song we had all been waiting for” the hit of the night was Poker Face. Idina famously sang it on Glee as a duet with Lea Michele, but when accompanied with the full London Philharmonic Orchestra and sung with her vocal power and range, it’s a completely different song. What made it memorable, however, was Idina’s running commentary about how lyrics such as “I’m not bluffin’ with my muffin” were completely inappropriate for the mother/daughter reunion scene that the song was used for. In addition, she humorously chided the Philharmonic Orchestra for playing the song for her, noting (in jest) that they must all feel that they have reached the pinnacle of their careers after all those years of studying by finally getting to play Gaga.

In summary, I loved it, loved her and would see her again any day.