Where possible, I try to stick to the regional food of each place I visit. The one glaring exception to this rule has been gelato. I managed to control myself and wait until I arrived in Italy before having any, but since then, gelato has become an almost daily occurrence.

Over that time, my preferences have moved from the chocolate based flavours to the fruit and yoghurt based and I was delighted to see the presentation offered in Budapest for my peach and yoghurt flavoured cone. 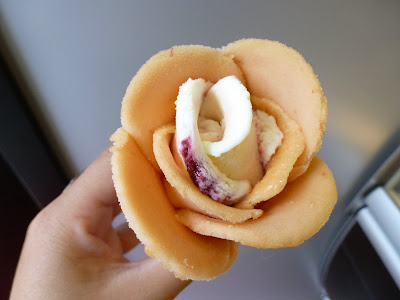 Whilst in Budapest, I was also on the hunt for Kürtőskalács, a Hungarian pastry shaped like a chimney sack. A thin yeast-based pastry is wrapped around a wooden cylinder and cooked over a rotisserie and then dipped in cinnamon sugar. An individual portion was far too much of a sugar overdose but did provide for some tasty snacking over my two days in town. 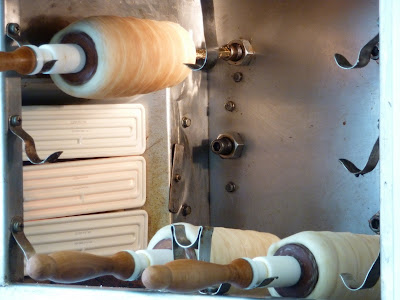 The Kürtőskalács on the rotisserie 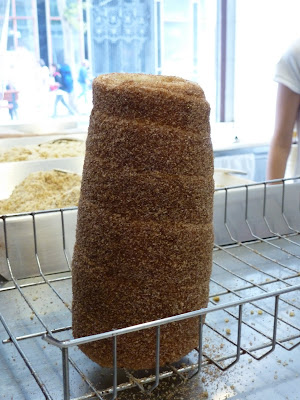 During my time in town, I walked around the city centre and headed to the central market which was one of the largest I have seen on my travels. I also took a hike up to the fortress which afforded full views of the river, Buda and Pest from the top and a spot to rest after the long climb. 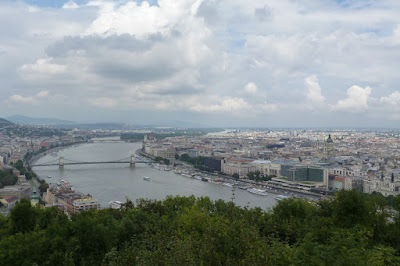 The view from the fortress

Finally, as a treat for myself, I took time out to visit the Rudas Baths for a soak and a long overdue massage. There are many thermal baths in Budapest but Rudas was the most highly reviewed on Tripadvisor and it was one of the few open to women when I visited. Tuesday is “ladies only day” which means that nudity is the norm and the foreigners in swimsuits are definitely the exception.

Email ThisBlogThis!Share to TwitterShare to FacebookShare to Pinterest
Labels: hungary