During my time in Austria, I was determined to have schnitzel. I knew that it would be no better than the schnitzel I make at home, but it has always been comfort food for me and I wanted it. I did not, however, anticipate the volume of schnitzel that I would eat in my two days in town......

I arrived at Vienna train station at lunch time and decided to find a light snack to tide me over until dinner. I stumbled across Trzesniewski, a chain that specializes in tiny open sandwiches priced at €1 each. 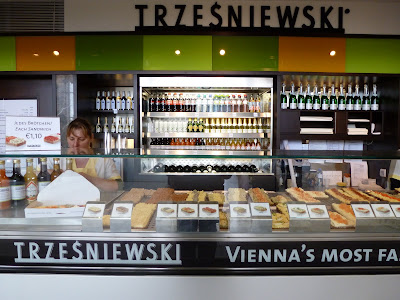 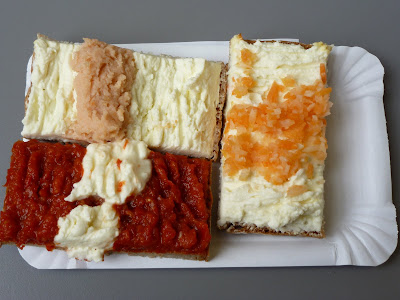 For my next meal, I was determined the have schnitzel and followed a recommendation that was given to me. I would guess that the majority of restaurant’s schnitzels taste identical but I decided to walk for about 45 minutes in the rain armed with a very poor map to find this place. For a sum of €8, I was given two enormous schnitzels and a huge serving of potato salad which was enough food to feed a family. I enjoyed it immensely but it was no different to home cooked. 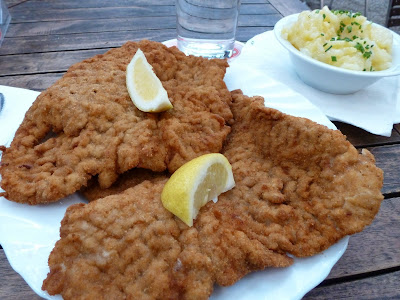 The next stop on my culinary tour was to Hotel Sacher, the birthplace of the Sacher Torte. Again, I was confident that this would be nothing special but rather a meal that would give bragging rights only. I am happy to report that it was in-fact delicious. The icing was quite thick and sweet and different to the ganache type icings that I have had before on Sacher Torte; In this case, I can say, that the original is certainly the best. 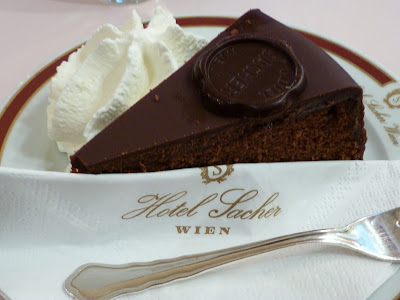 On my final night in Vienna, I went out for dinner with a group of new friends that I had met on a winery tour that day. We were a group of about eight people and dined at the ultimate of tourist traps: Centimeter.

We ordered the sword and the wheelbarrow. The sword was holding up six schnitzels, six pork steaks and six chili peppers. Below the sword were chicken wings, fries and chili con carne. The wheelbarrow was a huge platter of fries, spaetzle with bacon, spaetzle with cheese and pasta salad. The quantum of food was sufficient for about twenty people. It was tasty and affordable but the type of place you visit for the gimmicks and would never eat at if you lived in Vienna. 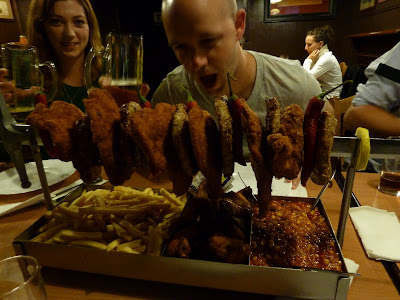 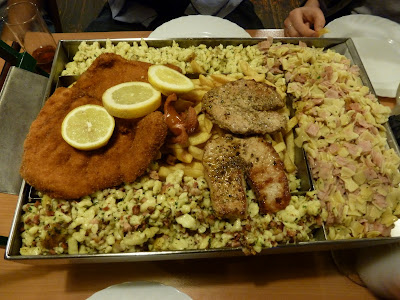 Email ThisBlogThis!Share to TwitterShare to FacebookShare to Pinterest
Labels: austria