I must admit that I did not know much about Krakow when I planned my trip, but I knew I wanted to come. I knew it was the home of the late Pope John Paul II and the closest town to Auschwitz. What I have learnt during my time here is that it is a very cosmopolitan city with fantastic food and, due to a favourable exchange rate, incredible value for money.

On day 18 of continuous rain in my travels, the clouds cleared and the sun came out for a glorious day. That, of course, was the day I spent 8 hours on the train travelling from Bratislava and the following morning in Krakow, the rain returned.

Krakow is a town easily explored on foot. There are plenty of trams and buses but the main attractions are only a kilometre or two apart so it's best to hit the sidewalks.

The main square of Krakow houses the Cathedral, a traditional market and countless restaurants serving everything from traditional Polish cuisine, to Thai food, pizza and the obligatory Hard Rock Cafe. Street performers roam the square and children try to chase down the pigeons with no success. 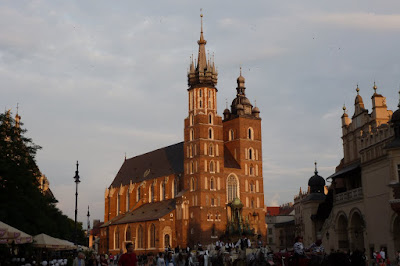 The cathedral in the main square 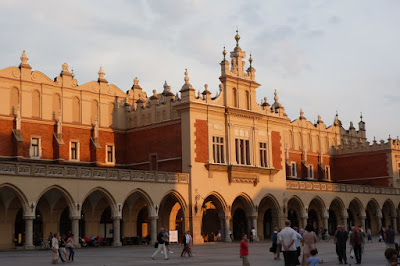 The traditional market in the main square
The Wawel Castle sits high on a high over Krakow and overlooks the Vistula River affording great views of the city. 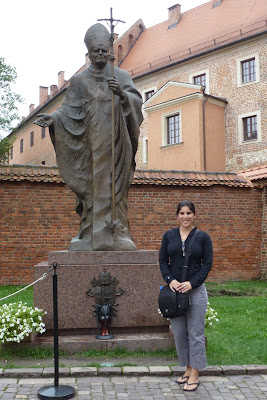 Located inside the castle grounds, the statue
of Krakow's favourite son: Pope John Paul II
The castle has an on-site restaurant was surprisingly wonderful. I am usually dubious of such establishments but I was cold, hungry and wet and decided that an early lunch was in order. For about $6, I ordered a soup and some pierogi.

The soup was a chicken broth served with toasted bread, a fried egg and sheeps cheese. The broth was hearty and the bread, egg and cheese all added some nice flavour and texture contrasts. 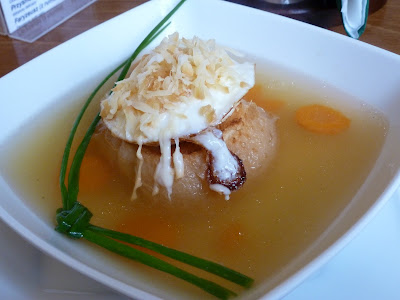 Pierogi, the traditional dumplings of Poland, come in many flavours (meat, cheese, potato, spinach) and I asked the waitress for her recommendation: spinach. They were delicious. The dough was al dente and the filling was fantastically seasoned; reminiscent of ravioli, it was a dish that would rival many Italian restaurants' offerings. 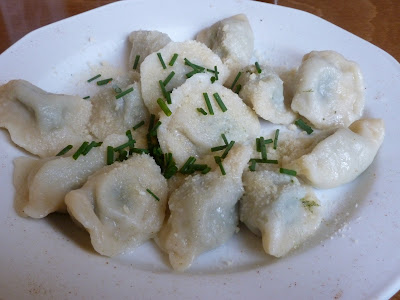 In the afternoon, I toured the Jewish Quarter which is filled with synagogues and restaurants but I was unsuccessful in locating any bagels or salt beef which I was hoping to find.

The main shopping mall, Galleria Krakow, is huge, well laid out and stocks local and international brands. You would be forgiven for thinking you were in the US when inside this mall and I did enjoy indulging in some retail therapy!

For dinner, I headed to the signature restaurant of the Hotel Wentzel, located in the main square of Krakow. and ordered the Polish tasting menu. 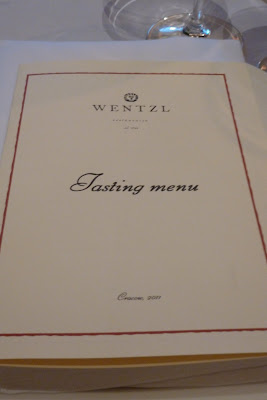 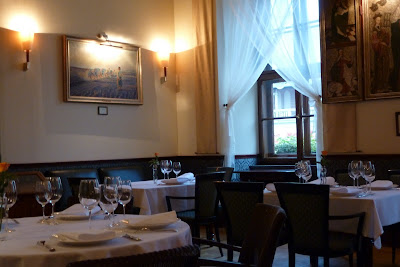 The restaurant interior
The amuse bouche was a salmon and trout terrine served with some mixed leaves and confit tomato. It was tasty but nothing special. 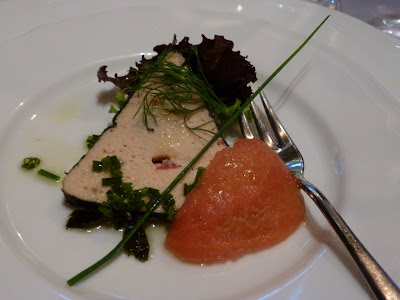 The appetiser was marinated herring rosettes with warm potatoes, onions and tomatoes. The herring was very strong in taste but enjoyable whilst the onions were redundant. 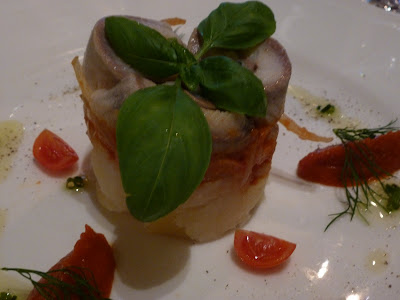 The main course was tenderloin of wild boar marinated with marjoram and pepper sauce. It was accompanied with a slightly overcooked carrot and a cabbage roll filled with meat, carrot and zucchini. The boar and sauce were delightful; the vegetables were a little disappointing. 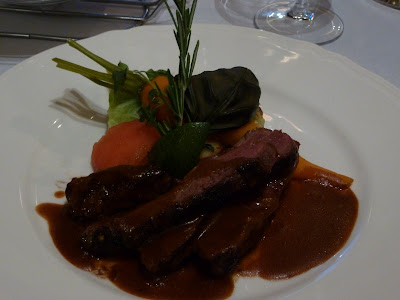 For dessert I ordered a coconut and almond mousse/cake served with raspberry coulis, vanilla ice cream and a plain tasting "bavarois" that was filled with raspberries. The mousse/cake (on the right) was wonderful with the coulis but the "bavarois" was not "worth the calories" so I left it. 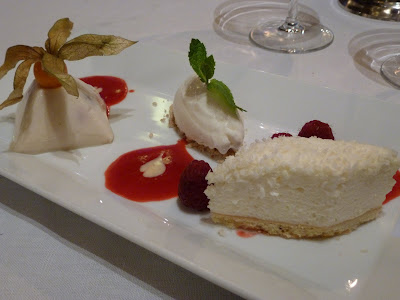 Including wine, bottled water and tip, the meal came to about $35 which was wonderful value and although there were some "misses", overall I enjoyed the meal.
Posted by Emily at 9:26 pm

Email ThisBlogThis!Share to TwitterShare to FacebookShare to Pinterest
Labels: poland