On my way to Milan, I decided to stop for one night in Verona. It had seemed picturesque in the movie, Letters to Juliet, and it is the home of the summer opera held in Arena di Verona that is advertised continuously in every major Italian train station. I bought a ticket to La Traviata and started searching for accommodation. 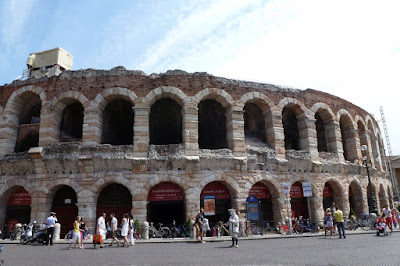 There is a lack of hostels in Verona and since it was a Saturday night in the middle of opera season, I was out of luck searching for a hotel. Luckily for me, the Protezione Della Giovane which can best be described as a shelter or safe haven for women, whether they be tourists, students or locals needing a safe place, was available and I booked in. On the plus side, it was incredibly clean and I had my own room for a bargain price. On the downside, a strict curfew is strongly enforced; I was duly warned: be back 15 minutes after the opera ends or the doors will be locked.

My time is Verona was limited so I walked around the town and visited Casa du Guilietta (Juliet’s house). The garden is nothing like Letters to Juliet; there’s nowhere for quiet reflection amongst the thousand or so visitors per hour that pour through the gates and there is nowhere to leave a letter to Juliet, nor any nice Italian women who respond. It is, however, lovely and the balcony is, of course, a popular spot for a photo. 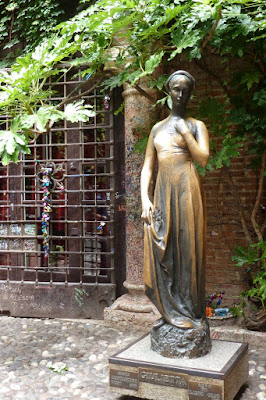 According to folklore, if you rub Juliet's right breast, you will get a new lover... 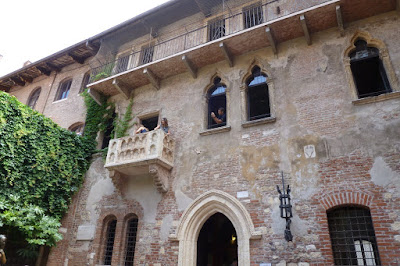 I have been in Italy for almost three weeks and as much I as hate to write this and admit it, I am sick of the food. I had dreams of distinct regional menus with Nonnas cooking in their trattorias and local specialties unique to each town. I have no doubt that this exists, but it does not exist when you visit the main cities (or is nigh impossible to find). Since it is my first visit to Italy, I was not going to avoid Rome, Venice or Milan in favour of small, impossible to find towns to satisfy my gastronomical ideals. However, in doing so, I seen almost identical restaurant menus from north to south (lasagna, four cheese gnocchi, pizza, prosciutto with melon, bolognese and all the other standards you will see in any family-style, $10-$15 a plate Italian restaurant back home). I have no doubt that I will return to Italy one day, and I will find “the Nonnas” and eat amazingly well. However, that it not this trip.

Therefore I had resigned myself to the idea of another dinner of fruit, or a small panini when I stumbled across Restaurante Maffei on my way to the opera. I have a habit of reading the menu of any restaurant I walk past and I was struck by the clearly unapologetic choices of dishes the chef had chosen to serve. The menu was filled with unique dishes that I had not seen on any other menu in my three weeks in Italy so I was intrigued. As I had unreserved seats at the opera, I was advised to arrive two hours prior to the start however the thought of a) sitting on stone steps for two hours prior to a three-and-a-half hour opera was not appealing, and b) seeing some food that I was actually interested in eating ma­de me ditch those plans very quickly. 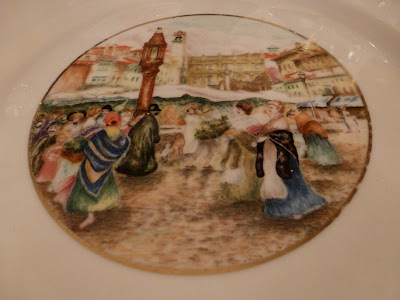 I ordered a four course tasting menu and there were some hits and some misses.

For appetiser, there was a beef fillet carpaccio marinated in fennel and paprika, juniper and cinnamon with a salad of baby greens and a special vinegar of Modena. This was a "miss". The beef was cut quite thickly and served cold so you really didn’t “taste” the beef and the marinade flavours were so subtle they were missing. 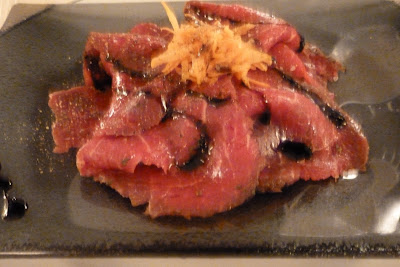 The first course was house made gnochetti with duck ragu and pecorino cheese which was wonderful. The aroma was heavenly, the portion size was perfectly dainty, the gnochetti were light and dissolved in the mouth and the sauce was slightly sweet with generous amounts of finely diced duck and well seasoned. By far, the best pasta dish in my entire Italian visit thus far. 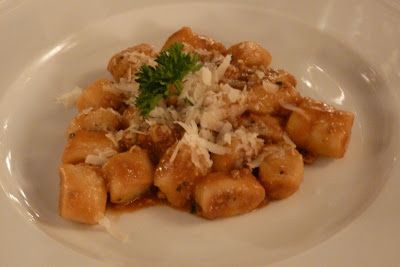 I’ve never eaten horse meat before and this holiday is all about expanding my horizons. The table next to me started making jokes about “my little pony” when one of their group ordered the horse as well. This got me thinking…..I started justifying it by saying that the horses were bred for this and eating baby horse is no different to eating veal. We eat beef and pork which is offensive to some religions, South American’s eat guinea pig which we consider a pet (or a rodent); I have never been one to refuse to eat an animal because it’s a pet (although I doubt I could ever eat a Maltese puppy)!

I went from the rational justifications to the vindictive. Horses and I have never really gotten on. In seventh grade, on a trail ride at school camp, my horse decided to rear up on me and nearly threw me off. In 2003, I went with my cousins to Rocking Horse Dude Ranch in upstate New York where my horse, Murphy (who I was told was a gentle horse who was great with beginners) decided to take off from the group with me hanging on for dear life. They say horses can smell fear and maybe that’s why they don’t like me. Perhaps now I’ve eaten horse, I have no reason to be afraid.

So how did it taste? It was surprisingly tender and very similar to beef. I had assumed it would be stringy and gamey. I’m not sure if it was because it was baby horse or if all horse tastes like this but it was fine. The dish itself, however, was a bit bland. If it didn’t have the novelty factor of being horse meat, it would have been a well cooked, under-seasoned piece of meat with some vegetables. 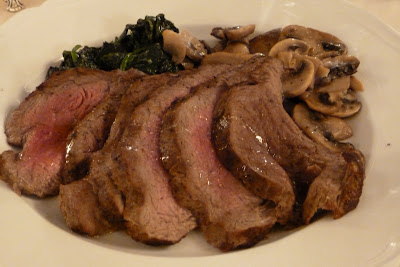 For dessert, I had the “local cheese degustation with house made mustard”. I forgot to take a photo of this course because by this time I had made friends with the table behind me and we were too busy sharing wine and cheeses. However, the menu description for this dish is highly inaccurate unless the UK and France are considered “local” to Verona. There was generic brie, a Monte Veronese, some UK stilton with carrot and a stale piece of Bagoss cheese from Lombardi and no mustard.

Overall, the meal was a welcome change from nearly every other restaurant meal I’ve had in Italy but the high quality of service and strong menu did not match the quality of food that was actually being plated in the kitchen.

After paying the bill I had about 10 minutes to walk to the Arena and find a seat. The one benefit about travelling solo is that you can arrive very late and still get a good seat as there’s always room for one more person to squeeze into that row. The opera was spectacular; for the vast majority I had no idea what was going on (they were in love, there was a fight, a party and like in most Chinese movies, she dies) but the production value and performances were brilliant. My new friends from dinner had asked me to join them for drinks afterwards but I couldn't due to my curfew, so as soon as the conductor put down his baton, I bolted for the exit and made it just back before lockout. 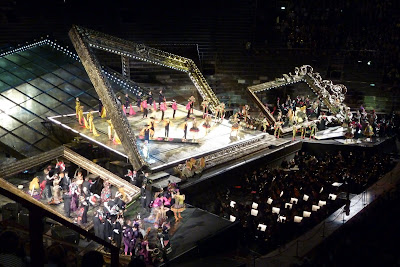 The view from my seat - a scene from Act 2 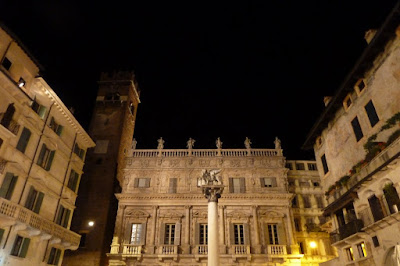